Convicted rapist and former Israeli president Moshe Katsav was sentenced today to seven years in prison for two rapes he committed while in office.

Former President Moshe Katsav gets 7 years in jail for rape
Katsav also receives two years probation and is ordered to pay NIS 125,000 compensation to his victims; judges: No man is above the law.
By Ofra Edelman • Ha’aretz 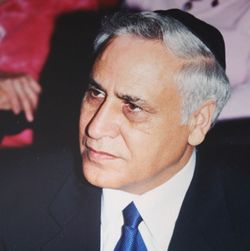 Former President of the State of Israel Moshe Katsav was sentenced to seven years in jail Tuesday, for after he had previously been found guilty of rape and other sexual offenses.

Katsav will begin serving his sentence on May 8, 2011.

In December, the Tel Aviv District Court judges, George Karra, Judith Shevach and Miriam Sokolov, handed down a unanimous verdict on Katsav's case after complaints had surfaced of sexual offenses against various subordinates during Katsav’s terms as tourism minister and president.

"On December 30, 2010, the defendant was convicted of committing serious sexual offenses against women who were subordinate to him," the judges ruled in a majority opinion.

"The crime of rape damages and destroys a person's soul… Due to the severity of the crime, the punishment must be clear and precise," the judges said.

"The defendant committed the crime and like every other person, he must bear the consequences. No man is above the law."

"The contention that seeing a former president of the country go to jail is too painful to watch is an emotional argument, but it definitely cannot be accepted as an ethical argument."

The former president and Likud minister was convicted of raping and sexually assaulting A. - a former employee of the Tourism Ministry while he was minister. He was also found guilty of sexually harassing H., of sexually abusing and harassing L. from the President’s Residence and obstruction of justice.

The year-long trial took place almost entirely behind closed doors and left the public wondering whether the 65-year-old Katsav was wise to drop out of a plea bargain two years ago.

The plea deal meant Katsav would not face the most serious charges and promised him a suspended sentence at worse, but the former president decided to prove his innocence in court.

Understandably, Katsav was very upset with the sentence:

Katsav erupts at jail sentence for rape: You let the lie win
Former president publicly denies his guilt as he is sentenced to seven years in jail for rape, sexual offenses; attorney hints at appeal.
By Ofra Edelman Tags: Israel news Moshe Katsav

Former president Moshe Katsav gave way to tears and cries of protest as he was sentenced by a court in Tel Aviv on Tuesday to seven years in prison, probation and heavy fines for rape and other charges was read out on a Tel Aviv courtroom on Tuesday.

As Judge Yehudit Shevach read out her judicial opinion, Katsav was embraced by his son, and the two began to sob. Katsav then yelled in the direction of the judges, "They are mistaken, it's all lies! The whole sentence is a mistake! Maintaining one's silence is not an admission of guilt!"

The court ruled that Katsav must serve seven years in jail, two years of probation and pay NIS 100,000 to his rape victim, a former employee of the Tourism Ministry known as A., and NIS 25,000 to all other complainants in the case.

Katsav asked his son, "Has there been one example in history when defendants fought for their truth and emerged victorious? They are mistaken, and it will all be proved! You are mistaken, ma'am, you are mistaken! You have committed an injustice! The judgment is wrong! You allowed lies to emerge victorious!"

As he left the courtroom, Amir called the decision "a sad day for the State of Israel." Amir continued, "The court has never made such harsh statements, from the Attorney General down to law enforcement agents."

According to Amir, "These matters should lead to an investigative committee. No judge even related to the fact that for the last four years, the legal system has quashed the defendant's rights."

Amir implied that his client would appeal the sentence handed down when, after the judges had passed sentence, he requested that the court postpone carrying out the jail sentence until a decision is made in Katsav's appeal.

"The process has lasted years, the acts occurred many years ago, it's no secret that the defense is not in agreement with the results of the judgment," Amir said. "We humbly accept the judgment of guilt, although we also dispute it."

Katsav's defense team has 45 days to officially submit an appeal of the sentence passed down Tuesday.

Convicted rapist and former Israeli president Moshe Katsav was sentenced today to seven years in prison for two rapes he committed while in office.