Ed. Ministry appoints haredi supervisors, petition looms
Despite initial apprehension from within the haredi world, all of the new supervisors conform to the broad definition of ultra-Orthodox.
By JONAH MANDEL • Jerusalem Post 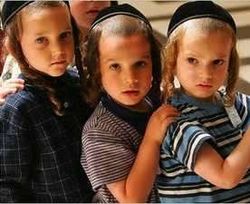 The Education Ministry announced on Monday the selection of 14 new supervisors for the haredi educational system.

Despite initial apprehension from within the haredi world, all of the new supervisors conform to the broad definition of ultra-Orthodox.

The new inspectors will undergo training and begin their new jobs after Pessah.

The Education Ministry said in a statement that “good and fitting candidates were chosen to be inspectors in all levels of the educational system.”

While the original tender had been issued for 15 inspectors, a Jerusalem Labor Court ruling in a preliminary hearing that took place in January determined that one of the positions be left vacant till the court decided whether rabbinic ordination should be recognized as equivalent to a bachelor’s degree, vis-àvis the Civil Service Commission’s prerequisites for the position of a supervisor in the haredi educational system.

The legality of the standard tender published by the commission in October for supervisors was challenged as discriminatory by the Haredi Clinic for Human Rights at Kiryat Ono Academic College and Rabbi Haim Havlin of Jerusalem, who, despite being an ordained rabbi with many years of experience as an educator, was denied the possibility to compete for a slot as a supervisor as he lacks an academic degree.

Haredi sources had expressed their concern that the demands of an academic degree along with the many years of experience indicated that Education Minister Gideon Sa’ar was intent on increasing the numbers of supervisors in the haredi educational system with educators from outside the ultra- Orthodox world.

A jurist involved in the petition on Monday called the selection of haredi inspectors “a goodwill gesture of Sa’ar, who is trying to make amends with the haredi public” after a contentious term with previous Deputy Education Minister Meir Porush (United Torah Judaism).

The petition, he continued, and the judge’s openness to its reasoning – that it is appropriate for an inspector to have an intimate knowledge of the system he would inspect – most likely helped the education minister finalize the candidates he did. But the struggle is far from being over, he added.

“We are not withdrawing our petition,” the jurist said.

“The next time such a tender is published – after the petition is accepted by the court – the variety of suitable applicants will be greater, and the quality of the inspectors selected can be even higher. It’s always good to have more choice.”

The court is still awaiting the Education Ministry’s response to the petition, which was due last week.