Rikers Island holds 14,000 inmates. When Chabad outreach first began at the jail, there were 7 Jews joining the programs. Now there are well over 150. On Purim, Chabad made a Purim party for the inmates and printed an edition of the Tanya – the foundational book of Chabad theology – in the jail.

Group Prints Tanya in Jail
The annual Purim Mivtzoim group to Rikers Island printed a Tanya in memory of the beloved Rabbi Yossel Tevel, the heart and soul of the group until his untimely passing.
Chabad.info 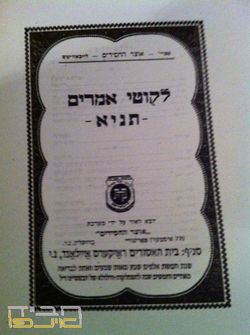 On Purim morning 8:30 AM from in front of Kosher Town a group of Bochurim packed into two mini vans and a car, along with food kyad hamelech and Yossi Cohen's muscial orchestra, and headed out to one the largest jails in New York.

Rikers Island holds 14,000 inmates. When Mivtzoim first began at the jail, there were 7 yidden joining the programs. By today, b"h/ unfortunately, there were well over 150 inmates.

The Bochurim were successful in doing all 4 mitzvos of Purim, like the Rebbe says, with all of the inmates and some of their families that were able to attend.

The climax of the trip was the printing of an edition of the Tanya on Rikers Island in loving memory of Rabbi Yossel Tevel who stated Mivtzoim in the prison systems in 1975.

An inmate shares his sentiment:

My first Purim in Jail

Purim @ Rikers Island - Through the eyes of a Jewish Inmate:

I never imagined I’d spend a Purim in jail. Purim was always a family time for me. A time to take my kids around and give shalach manos, hear the megillah and enjoy the festivities of the Yom Tov. Not a time to spend in a prison cell in Rikers Island!

As Purim was approaching, and there was no yeshua in sight yet, I was preparing for the worst Purim of my life. Boy was I in for a surprise! I had no idea that Chabad was coming to Rikers.

On Purim morning, I sat in the gymnasium at OBCC with my fellow inmates, waiting for the Jewish service to begin.

Suddenly, a chorus of voices, joyous laughter, singing and clapping could be heard in the hallway. In you guys stormed, all dressed in Purim costume, bursting with spirit, filled with energy and ready to brighten our day.

I watched in awe as the band set up, the food was unpacked and each of us was greeted with a smile and a huge hug. I couldn’t believe this was all taking place before my eyes in Rikers Island.

It felt really great to put on Tefillin and daven and of course to join the dancing circle with my fellow inmates and newfound friends. For just a few short minutes I was able to forget the harsh reality of life.  We danced and clapped, watched the Rabbi balance a chair on his nose and got lifted into the air on the Rabbi’s shoulders. Yossi Cohen, I must tell you, your music was incredible. Such heart!

When the music stopped, I gathered round to hear the megilla. I boo-ed every time Haman’s name was mentioned; the same way I booed back at home.  It was a megilla reading to remember.  We also exchanged mishloach manos and even gave matanos l’evyonim. To be able to do all 4 mitzvos of Purim – in Rikers – sure was a treat.

Next the food was served – pita, chumus, chips, soda, wafers, hamentashen – a real Purim party. It was followed by Rabbi Yitzchok Huriwitz as he played the Alter Rebbe’s Nigun on the violin. I was touched to tears.  With that inspiration, we all stood up, placed our hands on each other’s shoulders to sing Ani Mamin. It penetrated not just deep within each of us, but literally transformed Rikers.  We continued dancing for half an hour. Yossi, it literally felt like a wedding.

I sang. I laughed. I danced. I ate. I spent time with friends. For a few short hours I forgot where I was. For those few short hours, it is a Purim – and that was all that mattered.

The words V’nahapoch Hu took on a whole new meaning for me.  I now know that even in such dark, dreary place like Rikers, things could be turned upside down, and the joy of Yom Tov could still be felt.

What you did next really shocked me!

I don’t know how you managed to pull it off, with all the rules and regulations of the jail, but you did it! You guys brought a Tanya printing machine along to the prison facility and for the first time ever printed  batch of ONE HUNDRED Tanyas –   in loving memory of Rabbi Yossi Tevel – who started the work at this facility, along with many others, over 30 years ago.  I can’t believe these are the only Tanyas ever to be printed in Rikers Island. If you can, I’d love if you save me a copy.

I can go on and on, but I think I’ll finish here. I just want to thank the Lubavitcher Rebbe for sending his emissaries to uplift us in our darkest time and to the anonymous sponsors who have made this event possible. A special thank you to the Tevel brothers, Tzach and all of the volunteers who took of their time to come spend Purim with me. You have no idea what an impact you have made on my life (I speak for myself, but I am sure all the other inmates agree ) Thanks for being here for me during this most trying time.  I am forever grateful to you.

Posted at 11:19 AM in Chabad, Crime, Litigation, etc., Outreach | Permalink

Rikers Island holds 14,000 inmates. When Chabad outreach first began at the jail, there were 7 Jews joining the programs. Now there are well over 150. On Purim, Chabad made a Purim party for the inmates and printed an edition of the Tanya – the foundational book of Chabad theology – in the jail.