Security forces close exits from the city. At least 50 reported wounded. One dead. 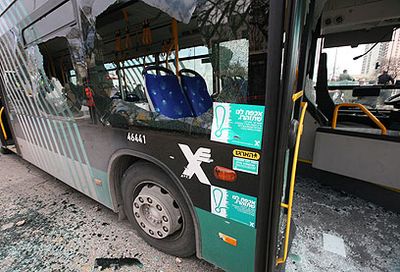 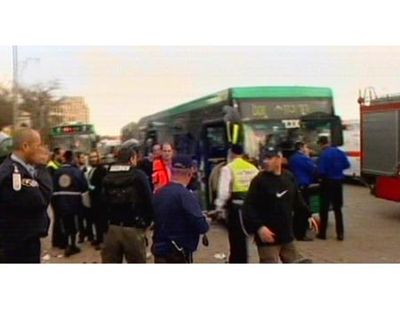 Please see the updates below.

Explosion on bus in central Jerusalem; 18 reportedly wounded
It was not yet clear whether a suicide bomber was behind the attack. The entrance to the city has been closed, and ambulances and police forces were arriving at the scene.

An explosion rocked a public bus on Wednesday afternoon outside the International Convention Center, just opposite the central station in Jerusalem.

At least 18 people were wounded in the incident, according to local media. The casualties were being evacuated to the Hadassah Hospital in Ein Karem.

It was not yet clear whether a suicide bomber was behind the attack. Two buses were

The entrance to the city has been closed, and ambulances and police forces were arriving at the scene.

NBC is reporting that 20 were wounded.

Update 8:43 am CST – The AP is reporting that 25 people were wounded but so far no deaths have been reported. The Israeli embassy in Washington says the attack was carried out by a suicide bomber at the bus stop.

Update 8:45 am CST – Now the Israeli embassy in Washington is saying it may have been a bomb planted at the bus stop.

Update 9:08 CST – According to MSNBC, Jerusalem is now saying it was a 2 pound bomb left in a bag on the sidewalk.

Update 9:53 am CST – MSNBC is reporting at least 26 injured, 2 critically and four seriously.

Update 10:17 am CST – The Jerusalem Post is reporting a total of 31 casualties. One of those people has passed away.

Update 10:20 am CST – This is the bus that was attacked. From Egged's website:

The first in its kind express bus route within Jerusalem. Route No.74 will operate between Har Khoma and Central Bus Station via Derekh Khevron, Keren ha-Yasod, Ha-Melekh George and Yaffo St.

Update 10:32 am CST – Ynet has the following quotes for witnesses to the bombing (and the two pictures I have now posted above):

…Shlomo Steiner, who works at the Jerusalem central bus station, witnessed the explosion and told Ynet about the images he saw

"I heard a loud blast. I looked out the window and saw smoke rising up, and a yeshiva student running around with his legs on fire. People were trying to help him put out the fire." he said. "I saw people lying on the ground and then rescue forces started pouring in. They were at the scene within a few minutes, evacuating victims…it was all very scary."

Yonatan Shakiba drove by the scene of the attack as the blast shook the area.

"I left the car and saw a boy running towards me with shrapnel wounds all over his body. He was injured in his arms and legs. He sat down on the ground and then laid down. An ultra-Orthodox woman who was there helped him, and then a guy came over with a tourniquet," he said.

"It was chaos…I looked around and saw many victims and a lot of blood. Rescue forces were all over the area, searching, opening and closing doors. It takes us back to trying times," he said.…

I've also heard (but cannot confirm) that a religious school and yeshiva ketana near the Central bus station were attacked by at least one terrorist shooting a gun. There are no reported injuries from this attack.

"We are following the news closely," Fayyad said in a statement. "Although there is not enough information about the attack that injured 20 people, I resolutely denounce this terrorist attack no matter who stands behind it. I wish a full recovery to those injured.”

Update 11:03 am CST – A friend in Jerusalem tells me a close relative was at the haredi school when shots rang out. Police came. No word yet on the attacker. No one reported injured.

Update 11:27 am CST – I'm now told it was a Chabad cheder (grade school) and that the shooter has been arrested.

Update 1:23 pm CST – My friend in Jerusalem writes about the school shootings:

Shooting started at around 3:15 p.m. (bomb went off just before 3) on Hiram Street at "Talmud Torah Tiferes Bonim" (Hasidic - Yiddish only) and "Shvilim" (Chabad for children with special needs) in the Romemah neighborhood not far behind the central bus station of Jerusalem. [Ploni] was in the Talmud Torah Tiferes Bonim at the time. All children were taken to safe-rooms where they lay on the ground and the police soon arrived. The police set up a parimeter around the schools of about four blocks, which no one was allowed to enter or exit. The children remaind lying in the safe-rooms during this time. Between 4 and 4:30 the parimiter was removed and the area was no longer cordoned off and the children were allowed to get up and move about freely. The manhunt ended after both schools would have anyway finished studies for they day (or mostly through the last period) and the children promptly went home. [Ploni] does not know how many shots were fired, but only that both schools (both of which he works at) were shot at, and once the police lifted the cordon and the children were allowed to move freely the prevailing "assumption" was that the assailant had been apprehended. I was outside after that time and there were still search helicopters surveilling the area. I don't know if they did catch the shooter or whether the police determined that he managed to escape the area before they arrived or whether the police determined that he was not connected to the explosion and continued their search for perpetrators of that attack - or a combination of the above. During the presumed-manhunt the area was "swarming" with police officers, and even regular officers donned bullet proof vests over their normal attire. It seems that the police were not "sharing" *any* information with the schools and only told them to stay in the safe rooms while the area was cordoned off and then let them know when they could resume life as normal, but did not share any info on their activities with the school officials. Although the media is reporting that there was no warning ahead of this attack, there was extra caution near the central bus station in recent days. In fact, on Friday I was delayed for nearly a half hour passing the station due to a not-that-suspicious bag that had to be opened by a bomb squad robot. Another anomaly: Last night [Ploni] came by to drop off [a package he] was carrying them in a large black bag. We live down the block from the PM's office (not the one at the Knesset, but the one for greeting diplomats) and down the other block from the President's residence. He passed by the PM's office, not even entering Balfour street, when two motorcade SUVs blocked him off and soldiers asked him what he was carrying. With their "panicked" state and his terrible Hebrew he couldn't communicate and they actually brought in [an interpreter] (not easy to do) and cleared things up. He looks like any Haredi who trims his beard. I pass there every day, by the "Gilad Shalit Tent," where this happened, and nothing like this ever happens. They were on extremely high alert.

Sorry, that's all I could get without any media reports or police interaction on the subject.

One last note on the schools:

Posted at 09:26 AM in Israel, Terrorism | Permalink

Security forces close exits from the city. At least 50 reported wounded. One dead.