Why It Makes Sense To Single Out Glenn Beck

While other people use the word Nazi for effect, Beck has placed his warped understanding of the shared DNA of Nazism and progressivism at the center of his show. This is not just hyperbolic rhetoric. This is historical revisionism.

Opinion: Why It Makes Sense To Single Out Glenn Beck
By Mik Moore • Forward 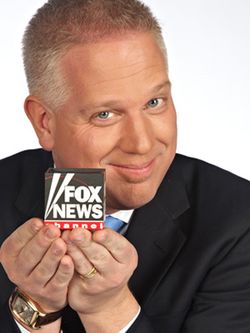 Recently 400 rabbis signed a letter to Rupert Murdoch, CEO of News Corporation, asking him to sanction Fox News Channel’s most popular host, Glenn Beck. Their concern: Beck’s ongoing invocation of the Holocaust and Nazis to demonize his opponents, as well as his use of traditionally anti-Semitic language to attack Jewish philanthropist George Soros. Jewish Funds for Justice published this letter as an advertisement in the Forward and in The Wall Street Journal.

The ads have sparked heated debate in newspapers, on blogs and on social-networking sites. We were grateful for the outpouring of supportive messages we received. But we are not unaware of the critiques, which have also been plentiful and impassioned.

Why, some ask, are we picking on Fox News and Glenn Beck? As the Anti-Defamation League’s Abraham Foxman wrote in a letter to The Wall Street Journal, “in my view it is wrongheaded to single out only Fox News on this issue, when both liberals and conservatives, Democrats and Republicans, can share equal guilt in making trivializing comparisons to the Holocaust.”

Let me be clear: Many people are too quick to use Nazi symbols or references to the Holocaust to place their opponents beyond the pale. This abuse diminishes the enormity of the Shoah, poisons the public conversation and feeds people’s worst inclinations. This is true regardless of the political leanings of the perpetrator. And yes, Fox News and Glenn Beck are not the only bad actors here.

In fact, liberals have been guilty of this particular sin more than once in just the past few weeks.

Rep. Steve Cohen, a Tennessee Democrat, recently stood on the floor of the House and compared Republican characterizations of the health care law to the “big lie” as perpetrated by Nazi propagandist Joseph Goebbels. After first defending his remarks, Cohen changed his mind and apologized the next day.

On January 30, hundreds of protesters demonstrated outside a conference organized by Charles and David Koch, who have played a central role in funding the conservative movement and opening the doors for greater corporate involvement in American elections. At least one of the protesters held a sign that read “Neuter Feral Fatcats” with the “s” written as a swastika.

These incidents are pretty typical of the ways Nazis are invoked in public discourse. Both were inappropriate.

First, the equivalency being drawn here is wrong. Both sides don’t “share equal guilt,” as Foxman put it. Glenn Beck in particular and Fox News in general do it much, much more than any other news channel.

Second, last summer, on behalf of 14 heads of national Jewish agencies, Jewish Funds for Justice’s CEO, Simon Greer, along with Rabbis David Ellenson and Steve Gutow, met with Roger Ailes, the head of Fox News, and Joel Cheatwood, the producer of Glenn Beck’s show. The meeting was prompted by Beck’s hundreds of invocations of Nazis and the Holocaust, including one instance of him doing so to attack Greer personally. The Fox News executives expressed their desire to address the concerns raised and in a follow-up email committed to use “the utmost sensitivity” when referencing the Holocaust or the events leading up to it. During Beck’s special attacking Soros, titled “The Puppet Master,” that commitment was breached.

Third, through its actions and statements, Fox News has demonstrated that it either doesn’t understand or has no regard for our community’s concerns about this issue. Not only did Fox break a commitment to Jewish leaders, but when asked in an interview what he thought about the widespread (and bipartisan) condemnation of “The Puppet Master” special, Ailes was dismissive. There are some “left-wing rabbis who basically don’t think that anybody can ever use the word, Holocaust, on the air,” he said. In the same interview, Ailes referred to the heads of National Public Radio as “Nazis” because of their decision to fire Juan Williams.

Fourth, Fox News is not some fringe public-access channel. It has more viewers than the next two most popular cable news networks combined. Beck alone reaches millions of devoted viewers every day. This gives Fox more power to shape our public discourse than almost any other entity. We must demand greater accountability from those with greater influence.

Finally, Beck doesn’t just invoke Nazis and the Holocaust to demonize people more often than any other prominent figure in America. He is advancing a worldview that asserts, counterfactually, that progressives during the first half of the 20th century paved the way for Nazism — and that today’s progressives are doing the same thing. While other people use the word Nazi for effect, Beck has placed his warped understanding of the shared DNA of Nazism and progressivism at the center of his show. This is not just hyperbolic rhetoric. This is historical revisionism. And it has an effect. In a 2009 report, the ADL labeled Beck the “fearmonger-in-chief,” noting that the claims made on his show “play an important role in drawing people further out of the mainstream, making them more receptive to the more extreme notions and conspiracy theories.”

In a letter to The Wall Street Journal, Jeffrey Wiesenfeld reminds us that Roger Ailes and Rupert Murdoch are responsible for News Corporation’s financial support of the Jewish Community Relations Council of New York and the Anti-Defamation League. These are good men, I’ve been told repeatedly. Friends of the Jews.

I’m glad that News Corp. gives money to charity, and not just to the Republican Governors Association. But if the people who run News Corp. really want to demonstrate their friendship, they would take seriously the concerns that Jews from across the political spectrum have expressed about their network’s most popular host. Occasional thoughtless references to the Holocaust are bad enough. But a worldview broadcast nightly to millions that paints all liberals as Nazis seeking to destroy America? Now that’s dangerous.

Posted at 08:02 AM in Media & Media Criticism | Permalink

Why It Makes Sense To Single Out Glenn Beck

While other people use the word Nazi for effect, Beck has placed his warped understanding of the shared DNA of Nazism and progressivism at the center of his show. This is not just hyperbolic rhetoric. This is historical revisionism.