The OCD Rebbe Of Satmar

The viciously anti-Zionist extremist rabbi, Yoel Teitelbaum, who founded and led the Satmar hasidic movement may have had mental illnesses that contributed to his bizarre behavior, a scholar writes. 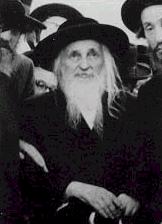 …[O]ne finds bizarre accounts of three-year-old Joel Teitelbaum repeatedly engaged for long periods of time in rinsing his mouth, washing his hands, and sitting on the toilet, often interrupting his own prayers to return to the outhouse. The explanation offered for this behavior, which was a source of great concern to his mother, is that the saintly child could not appear before his Creator in prayer without having completely purified his holy body of all forms of uncleanness.

Needless to say, a very different, clinical explanation jumps out from these narratives of childhood fixation: namely, that they testify to an extreme, textbook case of obsessive-compulsive disorder (OCD). The refusal even to touch Israeli currency can be adduced as another example of the same psychological disorder, as, still more weirdly, can Teitelbaum's unusual interest in the density of the fabric (the technical term is denier count) of the stockings worn by women in the Satmar community.

In Meisels's words, "The rebbe taught that even 70-denier stockings should not be worn. The numerical value of sod (secret) is 70, so the secret is out that this [stocking] is also transparent." There then follows a lengthy account of Teitelbaum's creation, with the help of a Brooklyn businessman named Lipa Brach, of an exclusive line of fully opaque women's hosiery:

Money in hand, Reb Lipa Brach began to work on the project. He went to several hosiery manufacturers, collected samples, and brought all of them to the rebbe to inspect. The rebbe was very pleased with the progress, and he tested each sample by pulling it over his own arm. If his hair showed, it was no good.... The new stockings were given the brand name, "Palm," the English translation of the Rebbe's surname.... To this day every Satmar woman and girl wears Palm stockings.

In many years of reading hasidic literature, from theoretical mystical tracts to tales and hagiographies, I have never encountered anything remotely like this image of a rebbe testing the thickness of stockings on his own arm, let alone naming a line of women's undergarments after himself. Was he aware of what he was doing? Most people who suffer from OCD are highly conscious of their disorder; a revered religious leader, zealously guarded by a closed circle of worshipful acolytes, would be more likely to mistake psychiatric symptoms as messages from God.…

…Punctilious in forbidding his followers to benefit from any form of Zionist assistance, he seemed to have made an exception when it came to saving his own holy skin, accepting a seat on a controversial rescue train organized by the Hungarian Zionist leader Rudolf Kasztner that saved some 1,650 Jews from sure death in the Holocaust. Immediately after the war, he also accepted a certificate for immigration to Palestine, having earlier forbidden his followers to avail themselves of just such certificates in the harrowing years leading up to the Nazi conquest of Hungary.

The chapter dealing with this episode is by far the most convoluted in Meisels's book. It concludes with an apologetic explanation according to which Kasztner's father-in-law, the head of the despised Neolog (Reform) community of Koloszvar, had a dream: his pious mother decreed that the train to Switzerland then being organized by her grandson not be allowed to depart without the Satmar rebbe. A particularly chilling passage follows: "When someone remarked about how the rebbe had been saved from the claws of the Nazis, from darkness to great light, the rebbe replied, 'No! I have come from the Nazi darkness into the even deeper darkness of the Zionist era.'"…

Suspension of Reality: Satmar Looks Back On The Satmar Rebbe, 30 Years After His Death.

Satmar Celebrates Anniversary Of Its Rebbe's Rescue From The Holocaust Without Thanking The Zionist Who Saved Him.

Posted at 09:29 AM in Haredim, History | Permalink

The OCD Rebbe Of Satmar

The viciously anti-Zionist extremist rabbi, Yoel Teitelbaum, who founded and led the Satmar hasidic movement may have had mental illnesses that contributed to his bizarre behavior, a scholar writes.