The Night New York’s Chinese Went Out for Jews

After the Kishinev pogrom, New York City's Chinatown held a benefit for the pogroms survivors. This is the story you've probably never heard.

The Night New York’s Chinese Went Out for Jews
Looking Back at an Unlikely Collaboration in 1903, an Earlier Year of the Rabbit
By Scott D. Seligman • Forward 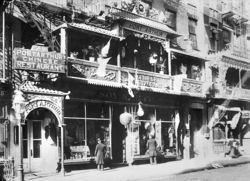 On a spring evening in 1903, in New York City’s Chinatown, a line snaked down Doyers Street from the Chinese Theatre as Manhattan played host to an improbable coming together of two immigrant communities: Chinese and Jews. They were queuing up for a Chinese-organized benefit performance for victims of the Kishinev pogrom that, the previous month, had killed 49, injured 500 and left 2,000 Jewish families homeless in the Russian provincial capital. The New York Times called the Chinatown event “the first affair of its kind that had ever occurred in the world.”

News of this first pogrom of the 20th century, which occurred suddenly after years of calm, reached the United States on April 24. Rioters had been goaded into action by a newspaper that falsely blamed Jews for the death of a young Christian man. Russian authorities watched without intervening, but did not permit the Jews to fight back.

New York’s Jewish community formed a relief committee, and soon raised $10,000 (about $256,000 in today’s money). House-to-house solicitations and benefit performances at Jewish theaters were organized. And Jewish merchants were asked to contribute 2% of one day’s gross receipts.

Newspapers across the nation editorialized and preachers of all creeds condemned the violence. Even Theodore Roosevelt expressed indignation. Jews, however, organized most relief efforts. No one expected aid from the Chinese, who despite living cheek-by-jowl with Jews on the Lower East Side had never taken much notice of them. Many Chinatown residents were barely able to scratch out a living of their own.

So it was a surprise when Joseph Singleton, a Chinese businessman, offered to arrange a benefit for Kishinev victims. One of a quartet of Chinese who spearheaded the effort, 49-year-old Singleton had arrived in New York 20 years earlier. A Sunday school teacher, he had taken an Anglo-sounding name, had adopted Western dress and had cut off his queue — the signature pigtail worn by Chinese during this era. He had gone into banking and cultivated many powerful government officials and business leaders.

Closely allied with Singleton was Guy Maine, superintendent of the Chinese Guild at St. Bartholomew’s Church. The son of a Bible teacher, he provided legal aid to Chinese victims of crime who found it difficult to get law enforcement from the police or justice from the courts. Dek Foon was a salesman, bookkeeper and restaurateur. And Jue Chue dealt in Chinese and Japanese imports. One of the wealthiest Chinese in the city, he was sometimes called “The J. Pierpont Morgan of Chinatown.”

All successful men, they had much in common. All spoke English well and had opted to live their lives in America. They wished to rid Chinatown of vice and to improve the lots of their compatriots, of whom 7,000 lived in New York in 1900. Three had married white women, and at least three were Christians, which was true of only a small minority of Chinese in America. And they were deeply opposed — like all of America’s Chinese — to the 1882 Chinese Exclusion Act and subsequent legislation that had ended most Chinese immigration into the United States and denied them citizenship.

They were also members of the Chinese Empire Reform Association, a group established by exiled Chinese intellectuals K’ang Yu-wei and Leung Kai Chew to promote constitutional monarchy in China; a New York chapter with Singleton as its head was established in 1902. It was in the name of the association that Singleton offered assistance to the Jewish relief effort.

“We believe in liberty and want to aid those who suffer from bigotry,” he declared. His proposal was a benefit at the Chinese Theatre, followed by a dinner at a Chinatown eatery.

On the night of the show, Maine spoke first and declared strong sympathy between Jews and Chinese, “as both had been persecuted.” New York rabbi Joseph Zeff, an early Zionist, focused, in Yiddish, on Russian atrocities against both groups. A “Mr. Rosenthal” — probably Zionist author Herman Rosenthal — praised the Chinese organizers and expressed indebtedness to them. And Leung, on his first visit to the United States, called Kishinev “a recurrence of the wild slaughter of Chinese in Blagovestchensk,” referring to an atrocity committed by Cossacks in a Manchurian town two years earlier, in which 5,000 Chinese were drowned.

The actors, who donated their services, were prevailed upon to give three performances in the 500-seat auditorium to satisfy all comers, and enjoyed a record number of curtain calls. The play, a drama titled “The 10 Lost Tribes,” was not about destruction of the Kingdom of Israel, but rather subjugation of Chinese by the Manchus in the Ch’ing Dynasty.

After the benefit, which raised $280 (about $7,100 in 2011 dollars), Singleton threw a banquet at Mon Lay Won — popularly known as the Chinese Delmonico’s — an upscale Chinatown restaurant. Among the guests was Yiddish theater actress Bertha Kalish, the “Jewish Bernhardt.” Exactly what was served that night is not recorded, but at a similar dinner for prominent Jews, despite the location, pork and shellfish had been notably absent. It appears the Chinese hosts tried, within their limited understanding of Jewish dietary laws, to make their Jewish guests comfortable, and that the Jews — some of whom were observant — did their best to meet them halfway.

Denied citizenship, the Chinese were trying to build alliances, and to the extent that Jews had already entered the power elite, this effort included them. Targets of anti-immigrant prejudice themselves, Jews were obvious allies. The Jewish press had opposed the Chinese Exclusion Act from the start, and Jews had spoken up during the debate preceding its permanent extension in 1902. Max Kohler, former U.S. assistant district attorney, had called Chinese exclusion “the most un-American, inhuman, barbarous, oppressive system of procedure that can be encountered in any civilized land today.” For Jews, exclusion was not only a moral issue but also a pragmatic one, because what had been done to Chinese could also be done to Jews. If pogroms continued, more would seek refuge in America. In the year following the Kishinev riot, Jewish emigration from Russia rose by more than 60%.

Leung, a diarist with a keen eye, thought that in America, the Chinese had much to learn from the Jews. “When I read the newspapers, I see that the Jews are the strongest among the immigrant communities in the U.S. I have heard 30–40% of the banks belong to the Jews,” he wrote, without revealing sources for these ostensible facts. “The longest street in New York has thousands of shops. The Jews own 60–70% of them, while we Chinese have only one.” Leung admired the fact that Jews had gained power in local government through unity, a characteristic his factionalized Chinese brethren sorely lacked.

Proximity and shared victimhood notwithstanding, an alliance between the two groups never really developed much beyond these efforts, and the event was forgotten before long. But even if all it amounted to was a single night when one persecuted people reached out to another, it was no less an extraordinary — and unexpected — gesture of solidarity.

*Scott D. Seligman, a writer and historian, speaks and reads Chinese, but had to call for help with the Yiddish sources for this article. *

The Chinese Year of the Rabbit begins on February 3, 2011.

The Night New York’s Chinese Went Out for Jews

After the Kishinev pogrom, New York City's Chinatown held a benefit for the pogroms survivors. This is the story you've probably never heard.