The Stamar Rebbe, Zalman Leib Teitelbaum, visited Lakewood this week. And who does the esteemed Rebbe have sitting in a place of honor near him? A convicted thief.

Rabbi Moshe Chaim Strulovics stole the life savings of poor non-Jewish Eastern European peasants. He spent time in an Austrian prison for that fraud and refused to testify against his haredi co-conspirators due to mesira, a halakha, Jewish law, that forbids informing on a fellow Jew. After his release, Strulovics was welcomed home to Lakewood with a gala party attended by many of the town's leading rabbis, including Lakewood rosh Yeshiva Malkiel Kotler.

Now the Satmar rebbe, Zalman Lein Teitelbaum, has come to Lakewood for a visit, and who is sitting in a place of honor near to the rebbe? Rabbi Moshe Chaim Strulovics: 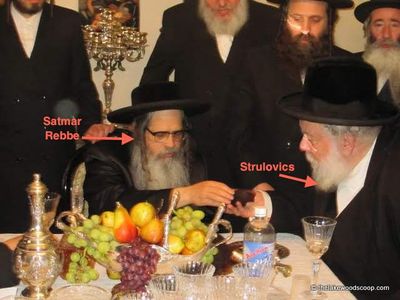 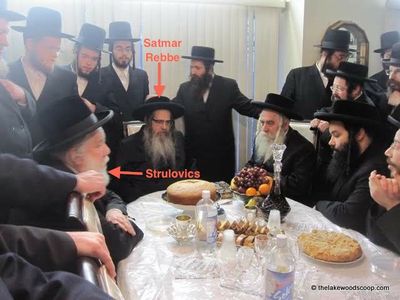 The Satmar Rebbe also gave Strulovics shirayim, leftover food from the Rebbe's plate, which is also considered to be an honor.

Here is the entire aritcle:

Vienna - In a shocking twist, A prominent Charedi millionaire Chaim M. Strulovitz was released from jail yesterday after an Austrian judge granted the 61 year old Strulovitz a conditional sentence allowing him to walk free.

Strulovitz was arrested in the U.S. Lakewood, New Jersey in June 2008 for running afoul of the Austrian government, and was extradited back to Austria after being on the run for years, and was put on trial.

On the fourth day, he pleaded guilty, admitting that he was the head of a conglomerate of firms that defrauded some individuals.

In a mild verdict, which surprised even the best-informed court observers, he was condemned to ten months jail without probation plus twenty months with a probation period of three years. He was set free immediately, since he had already served the sentence in custody. The judged also fined him with $200,000.

The sentence was commuted to 30 months in jail of which 20 have been served and the rest served either in investigative detention or rendition.

Rabbi Tetilbaum expended major efforts and explored different ways to release Strulovitz, including by hiring top lawyers. Nevertheless, everyone feared that the Strulovitz would be sentenced to may years in prison.

Several months ago, Rav Yaakov Ber Teitelbaum, the son of the rebbe and rav of the Sighet beis midrash in Boro Park, and the Horodenka rebbe from Manchester, flew over to assist in the court case.

With the assistance of the renown Williamsburg askan, Rav Moshe David Niederman, the rabbis met with the judge and explained that the Mr. Strulovitz had no intention to cause harm to the country and was deserving of clemency.

During one of the trial hearings, Rav Yaakov Ber surprised the prosecution when he gave a heartrending speech in favor of the defendant. The prosecution agreed to work out a plea bargain with the lawyers, in which he would pay a fine and sit in prison only one year.

The Stamar Rebbe, Zalman Leib Teitelbaum, visited Lakewood this week. And who does the esteemed Rebbe have sitting in a place of honor near him? A convicted thief.