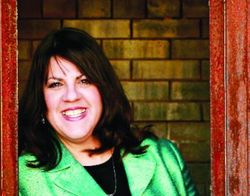 Her 11th-hour plea agreement with prosecutors means Runge, 45, will likely face less time in prison than she would have if convicted on all five felony counts brought against her by Iowa’s Attorney General.

Before she agreed to take the plea, the novice filmmaker who created Polynation Pictures with three partners could have faced anywhere from 10 years to 65 behind bars.

Runge admitted in court that she made false statements to the state to procure state tax credits for both projects.

“At the time that what I was directed to do so by Tom Wheeler,” she said.Runge said little else during her plea other than “yes sir,” “no sir” and “I do” and “I understand” to Judge Douglas Staskal.

Runge’s trial lasted a week and a half. An Omaha native and mother of four, she was accused of inflating the costs of the 2008 film “The Scientist” and the other projects she had in the works when Iowa’s film program was suspended in 2009.

An expert witness for the prosecution said during her trial there would be no possible explanation for production costs on “The Scientist” to balloon 10-fold, from $55,000 to $250,000. He also said most filmmakers would never submit more than one project for film incentives; Runge submitted about a dozen just before Iowa’s were capped in 2009.

Runge’s case will likely be followed in late March by one involving Dennis Brouse, a public television personality from Nebraska who took home most of the $32 million in tax credits awarded before the program was shut down. Bruce Heppner Elgin, an Iowa filmmaker, also is charged by state prosecutors in the ongoing case.

Two of Runge’s partners, Matthias Saunders and Chad Brandau, have taken plea agreements. Their sentences will be scheduled now that Runge’s case is over.

Felony charges against Zach LeBeau, a screenwriter who was heavily involved in claims made to the state, were dropped in exchange for his early cooperation in the case.

A civil case seeking to recoup state dollars lost to Runge and her partner, including Witter, is still pending.

On Wednesday afternoon, one of Runge’s lawyers testified that Iowa’s new Secretary of State provided no legal advice to a Minnesota filmmaker accused of felony theft and fraud in the film fiasco.

Jeffrey Coats, a partner in the Council Bluffs law firm that defendant Wendy Weiner Runge hired to create her company, said fellow partner Matthew Schultz was a family law specialist who never got involved with two other partners.

Rumors have swirled about what, if any, culpability Schultz might have had since before the Republican was elected in January.

Update 9:45 pm CST – The following email was sent today by Runge to her email list of supporters:

My dearest friends and family, as the bracha from Reb Michel Twerski directed:  We have emerged VICTORIOUS!!

Looking back on a grueling trial, a complicated preparation, false accusations, betrayal, questions of guilt on any number of financial charges...I was offered a plea bargain that my Rav sanctioned:  I willingly plead guilty, with the former film commissioner, to causing two applications for projects to be swapped for one another.

Why is this a victory?

Because this mistake occurred and it was the emes.  I never denied that the film commissioner approved and facilitated this change and we did it with full disclosure.  However, the State felt it was an illegal act. I accepted full responsibility for my part of this and I accepted the plea for this one charge.

All other charges and the civil suit against me were dropped. I am vindicated...I didn't steal or authorize any one to steal from the citizens of Iowa. I did not plan or plot for more theft. I was not a "criminal mastermind" as the newspapers declared. I was duped by a State official and I accept my part.

Yes, I have to cooperate with the State.  I have NEVER had a problem doing so.  All we ever wanted was show the emes.

I accept my responsibilities b'simcha because this was the MOST amazing and transformative experience I have had since I became a b'al tshuvah.

Never did I feel that HaShem was not with me.  Well, not for more than a few minutes at a time...and then I knew I was wrong!!!

Never did I do something of which I was not proud.  Especially today.

I always felt that all of you were all with me and urging G-d to be with me on this harrowing roller coaster ride.

What occurred today was a miracle.  Iowa can save face that they got "a conviction" and I was proven right that I did not do anything illegal in my business practices on THE SCIENTIST.

I humbly thank HaShem for Pinchus, my children, my family, friends, my legal team, Thomas, and all of the selfless acts you all provided to help me make it to this day. Baruch HaShem...I'm leaving Iowa (hopefully) tomorrow.

Update 4:25 am CST 2-17-11 – WHO TV's rport closes by noting that, as part of her plea arrangement, Runge has agreed to testify at other the trials of other film office scandal figures:

The first film tax credit trial ended in a win for the state. Wendy Weiner Runge pleaded guilty to one count of fraud. By doing that, the state dismissed the other four charges against her.

The only time we heard from the Minnesota movie maker during the trial was when she admitted her guilt.

"Did you do this for the purpose of obtaining economic assistance from the state of Iowa?"

In her statement to the court, Weiner Runge said she acted with Tom Wheeler, the former head of the Iowa Film Office when she changed the documents. Her guilty plea isn't connected to the movie, The Scientist, even though her production company collected $1.85 million dollars in tax incentives for making the movie.

Her plea applies to one of the projects she had in the works. Weiner Runge filed 13 applications with the state just before the state placed a cap on the program. Today, she admitted that she committed fraud when she swapped one project for another.

Deputy Attorney General Thomas Henry Miller says the state isn't done getting to the bottom of what went wrong with the tax incentive program. "We wish to continue to investigate and unravel and solve what happened here to hold accountable those who did in fact commit crimes and thefts and abuses against the Iowa Film Office and against the people of the state of Iowa," he says.

Fraudulent practice in the first degree carries a maximum sentence of ten years in prison and up to a $10,000 fine. After accepting her guilty plea, the judge made it clear that there is no guarantee for sentencing. She also agreed to testify if asked by the state in any upcoming film tax credit trial.