Shortly after Shas' spiritual leader ruled that army conversions were valid, those opposed to the decision announced they will hold a mass rally against the ruling. It has since been postponed several times. It is currently scheduled for next Wednesday.

The protest was initiated by Eda Haredit rabbis who have recently been joined by mainstream haredi leaders such as Chaim Kanievsky and Rabbi Elyashiv. Activists associated with the "committee for the struggle against assimilation" hope to recruit more senior rabbis for their campaign.

The organizers promise a large-scale demonstration during which protestors will cut their old clothes, as mourners do in the case of the death of a close family member. 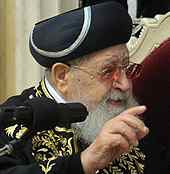 Last month, Rabbi Ovadia Yosef ruled that all conversions performed by the IDF in recent years were valid despite the fact that a special committee appointed by Chief Sephardic Rabbi Shlomo Amar determined it could not recommend approving the conversions.

Following the ruling all recent disputed IDF conversions were validated.

Posted at 03:07 AM in Haredim, Israel, Sefardim | Permalink