Pay Students, Not Yeshivas, To Cut Down Fraud, Litzman Says 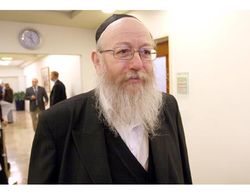 [Israel's haredi] Deputy Health Minister Yaakov Litzman has proposed a new arrangement to prevent yeshiva fraud: State funding will be provided directly to yeshiva students, rather than to yeshiva principals.

Every month, the state budgets NIS 600 for each yeshiva student. Currently, the yeshivas get the money, a total monthly sum of NIS 45 million.

A Yedioth Ahronoth investigative report recently revealed that some yeshiva principals cheat the state by inflating the numbers of students that actually study in their institutions. At the same time as the investigative report was published, the Education Ministry undertook its own investigation and drew similar conclusions.

Litzman presented the new initiative last Thursday in a letter to Education Minister Gidon Saar. The proposal calls for each yeshiva student who is entitled to a state stipend to apply directly for the payment, and for the money to go directly to the student.

The Organization of Yeshiva Principals said in response, “We have no knowledge of the program, and it will be discussed by religious leaders.” Unofficially, however, yeshiva principals expressed reservations about the plan. “This plan entails a lot of bureaucratic difficulties and it would also be able to cheat the system. This is not a good solution.”

If a scammer is caught, try him and send him to prison for a few years. And if a yeshiva is caught, send its management to prison and bar the yeshiva from receiving any state funding for at least five years.

Haredim will quickly stop stealing money when the pain inflicted after being caught is significant.

Posted at 10:31 AM in Crime, Litigation, etc., Haredim, Israel | Permalink

Pay Students, Not Yeshivas, To Cut Down Fraud, Litzman Says