« After Threats Of Massive Haredi Street Demonstrations And Possible Riots Against Him, Rabbi Ovadia Yosef Backs Down | Main | Haredi Women Can Be Great Engineers, CEO Says »

If you look at the label of Rimon milk posted below you'll see it is manufactured at plant #36-1661.

Midland Farms, which is located in Menands, near Albany, New York.

In September 2010, Midland Farms had a massive milk recall in five Northeastern states because it was not correctly pasteurizing its milk:

ALBANY — Milk sold in five Northeastern states has been recalled because it might not have been properly pasteurized.

Inspectors found failed pasteurization equipment at the Midlands Farm plant near Albany on Sept. 7. The company agreed to the voluntary recall as a precaution against bacterial contaminants like listeria and salmonella. There have been no reports of illness as of Thursday.

Consumers should look for the plant code 36-1661 and a Sept. 24 date code. Milk should be returned to the place it was bought. 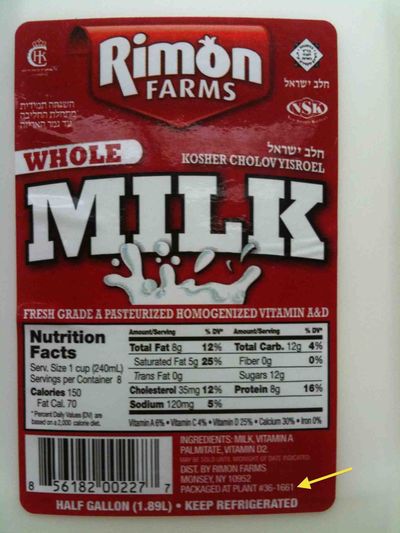