Mass Post Against Threats Against VIN And Its Advertisers

Bloggers get together to oppose attacks on VIN and its advertisers.

Update 9:45 pm – Apparently a stronger letter is now being written and will be posted in a day or two. I'll leave this one up so you can see the difference between the two letters.

The following letter has been circulated among Jewish bloggers by DovBear and Rabbi Gil Student, many of whom are posting it tonight. All I'd add is that I broke the story of the ban and I broke the story of the "activist" behind it, who is, I believe, one of the people making threats against VIN's advertisers. If you go back and look at my original posts, you can see his name. There is another person also making threats, I believe, or lending his name to the threats made by others. That would be R'AK. 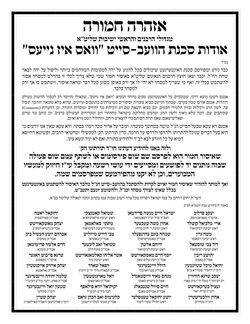 A little over a month ago, a number of rabbis signed onto a ban that forbade advertising on or otherwise working with the website VosIzNeias. This ban singled out one website without addressing other websites or public forums like newspapers or magazines. Bans of this nature are always brought into fruition by activists and this one is attributed to a specific activist.

We have received reports of continued harassment by this activist, who is threatening to publicly denounce people, companies and charitable organizations who continue to cooperate with the website. He has also reportedly threatened to remove the kosher certification of companies that fail to adhere to the ban.

To the best of our understanding, this activity is illegal. One individual told us he reported that harassment to the police.

Harassing good people with threats is illegal and inexcusable. We call on rabbis and people of good faith to denounce this behavior, and after consultation with a world-renowned posek we encourage victims to respond to this activist as follows:

If he calls or e-mails you or your organization, thank him for bringing it to your attention and say that you will decide how to proceed after consulting with your rabbi or other advisor. And because of rumors that there is harassment involved in this matter, you regret having to tell him that if he contacts you or anyone else in your organization again, you will have to report him to the police.

Below is an e-mail forwarded to us by people involved. Note that at this time, we are withholding this activist's identity. If he continues harassing people, we will have to be less discrete.

Subject: kol koreh against smutz web site vus iz neis -no heter no advertise their or help them in any way

The rabonim of the vad  were approached buy the public complaining  that YOUR COMPANY is advertising on the banned  web site called '' vus iz neais ' .this web site  was banned buy the gedolim and roshai yeshivas.

we are  attaching  the kol koreh.

the kol koreh is  baning to advertise or to assit them in anyway,it is  singed buy all major gedolim and roshai yeshivas .

we are sure that this is  a mistake and we hope that you will follow the das torah and act accordingly.

please e mail us back a statement regarding the above , because the rabonim are going to convene next week and we hope that your company will not be mentioned their as being a  company that  are  not in compliance with the kol koreh .
all the best

Rabbi [pseudonym removed]
vad harabonim
[phone number removed]
p.s. other  major companies and zedoke organisations have sent us statements that they have puled their ads ,but  vin web site doesn't want to look bad, so they still keep the  ads running although they don't get paid for it.

Mass Post Against Threats Against VIN And Its Advertisers

Bloggers get together to oppose attacks on VIN and its advertisers.