The letter is seen as a threat to the blog's owner that resulted in the blog severely limiting comments and posts.

The following is a letter allegedly written several months ago by Lakewood Yeshiva's rosh yeshiva, Rabbi Malkiel Kotler, saying that the blog the Lakewood Scoop must be shut down. The Lakewood Scoop exposed several scandals in Lakewood's haredi community, angering Lakewood haredi rabbis. The translation is courtesy of a reader who alerted me to the picture of letter, allegedly in Kotler's handwriting, published on the Lakewood View yesterday afternoon: 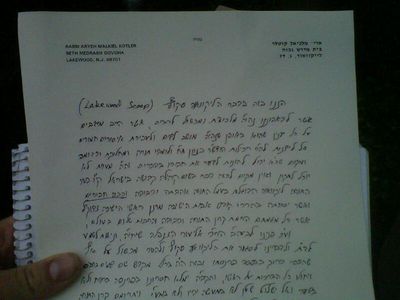 Regarding the "Lakewood Scoop" that to our dismay has become a stumbling block for the masses, {a site in which many} people comment on any and all subject matter, so that {the website has} become a meeting place of scoffers, {offering an opportunity to} transgress the severe sins of: scoffing, evil speech, gossip, slander, demeaning of Torah scholars and those who study Torah, causing fights, etc. It has also become a place for any person to cause another pain with words. {All the aforementioned are} sins that cannot be reversed, and as such there is no place {for a website of this sort} in any holy Jewish community, how much more so in Lakewood the City of Torah, which is built upon toil in Torah, love {of Torah}, honor {of Torah}, and honoring friends, and whose foundation was built in holiness by the {esteemed} patriarchs of the Yeshivos, our Masters, the Roshei Yeshiva, zatzal, whose entire mission was to raise the crown of Torah, its honor, and to increase peace in the world.

Therefore, we have turned to the owner {of The Lakewood Scoop} HaRav Eliezer Hassenfeld, may he live, {in hopes of his} willingness to submit to Da’as Torah, and to our words, to close down The Lakewood Scoop {thereby} removing a stumbling block, even though this will cause him a loss of livelihood. {If he will do this, then} he will be included in the {distinguished} category of {those who} bring glory to Hashem's name in public, and {measure for measure} all the blessings {from Heaven} will descend upon his head, and may Hashem {God} repay any loss of livelihood {that he may incur} in great measure and without any pain, {in addition} the Satan should not have any power to interfere in {HaRav Eliezer Hassenfeld's} handiwork, nor in our handiwork, and may the crown of Torah be elevated...

The letter is seen as a threat to the blog's owner that resulted in the blog severely limiting comments and posts.