« How Did They Become Jews? | Main | Pay Students, Not Yeshivas, To Cut Down Fraud, Litzman Says »

He has Madonna, Mick Jagger and Donna Karan on his speed dial. When Ashton Kutcher and Demi Moore decided to get married, they asked him to perform the ceremony. As he visits Israel to promote his new book, Rabbi Yehuda Berg explains why Judaism should be shared with non-Jews too.

The agent of Kabbalah
He has Madonna, Mick Jagger and Donna Karan on his speed dial. When Ashton Kutcher and Demi Moore decided to get married, they asked him to perform the ceremony. As he visits Israel to promote his new book, Rabbi Yehuda Berg explains why Judaism should be shared with non-Jews too
Danny Spektor • Ynet 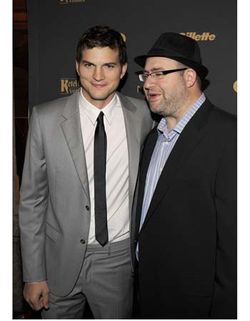 If Rabbi Yehuda Berg ever decided to have a barbeque in his backyard, the list of guests would include Madonna, Mick Jagger, Ashton Kutcher, Demi Moore, Donna Karan, Gwyneth Paltrow and other Hollywood stars, who would arrive with their prettiest red string bracelet.

This list of friends is not random, as Rabbi Berg is the face of the Los Angeles Kabbalah Center, which has become a magnet for Hollywood celebrities in recent years. So what if they're not Jewish? Everyone is welcome.

The Kabbalah Center is often slammed for allegedly trying to make headlines in any way, which does not match the principles of Kabbalah. "We had no intentional strategy to recruit famous people," Berg defends himself. "The way they reached us shows that it all came from them, not at all from us."

So how did Madonna arrive?

"One bright day, in the middle of one of our lessons, Madonna suddenly walked in. We didn't know she was coming. Seventy people are sitting in the classroom and she walks in, and naturally everyone looks at her.

"You see the person who brought her there, and you say to yourself there is no chance that he knows anyone important. He looks like a simple waiter in a café. He was the one who brought Madonna to us. We didn't even think about recruiting her. It was 12 years ago, she started studying and has been with us ever since."

What attracted her to Kabbalah of all things?

"Madonna said she just felt something was really missing in her life. After all the money, fame and everything, something was still missing. She came to our center where she felt she could just be herself, without the need to hide behind the curtain she always puts around herself. She can be an ordinary person. That's how she explained it to me."

And how did Ashton and Demi arrive?

"Madonna had a study class in Los Angeles and Demi Moore, who was a probably a good friend of hers, came with her. After she started dating Ashton she brought him along too, and it just took on from there. It wasn't planned, each person just brought the next."

The relationship quickly left the boundaries of the classroom, and Berg became Moore and Kutcher's good friend. "At first Ashton invited me to watch football in his house on Sunday, because we're both fans, and we quickly connected and became good friends," he says.

Berg was the one who performed the couple's secret wedding ceremony in their Beverly Hills home. "It's both a teacher-student connection and a friendly connection, so it was clear that when they got married they would want me to do it, and that's what happened."

"It was a small and very special ceremony. They didn't invite many guests, just 100 particularly close people who want what's best for them. They didn't tell anyone that they were getting married, not even the guests. It was a nice and moving ceremony and was also of a Jewish traditional nature – it was important to them to do it by the rules."

The next stage is for you to convert them, isn't it?

"No, that's really not the goal. We genuinely believe that Torah was given to everyone, and if these people come on Shabbat to listen to the Torah or on Rosh Hashana to hear the sound of the shofar, then we've done what it takes.

"We don't feel the need to convert them, and they're happy with the current situation too. We're happy to see them visit Israel because although it is the Jewish state, it has a huge attraction power."

Indeed, Berg has brought his celebrity friends along on several visits to Israel, the latest one several months ago.

"They arrived to connect to the energy and tombs of the just," he says. "On Rosh Hashana our visit was much more successful because we didn't go around. We went to the tombs of the just, and there were no visits to restaurants or all kinds of people and disruptions all around. There were a few times when there was a commotion around them during their visit, but they generally liked Israel and the people and connected to the country's internal feelings."

Berg arrived in Israel on Sunday, this time to launch his new book, "The Prayer of the Kabbalist: The 42-Letter Name of God," at the Jerusalem international Book Fair. It's his sixth book in Hebrew and the 16th in English.

"'Ana Bekoach' (the book's Hebrew name) is one of the first tools we give people who come to the center. It comes from my parents. It's the biggest tool which gives us the option to concentrate our thoughts and energies every day, and brings us help from the universe. It's a prayer based on 42 letters, which are the initials of a code explained by the Zohar, the first 42 letters of the Book of Genesis."

And how did it become a book?

"It was so common in the center and no one knew all the codes, so I decided to write a book about it. When I got into it I learned a lot. When I write I don't only teach, I also learn."

Here in Israel 'Ana Bekoach' was a big hit on the radio several years ago.

"When the Ovadia Hamama song was released, I used to listen to it a lot. I really liked it. The book takes me into all the obstacles we reach in our life, the questions we sometimes think have no answer. So if there is a question, somewhere in the world there is an answer. Someone has the information, we're just not connected to him. The Creator gives us the possibility to connect to the answer and to the solutions."

The Berg family operates more than 50 branches of the Kabbalah Center worldwide, including a big office in Tel Aviv. As opposed to other streams of Judaism, Kabbalah followers believe the faith should be shared with non-Jews as well.

"Torah was not only given to Jews; everything was given to everyone," Berg explains. "Kosher food is not necessarily ours either. Rabbi Shraga (Yehuda's father) says it's open to everyone and we're open to everyone in physical places too – on the Internet and through teachers teaching on Skype.

"There is a part in Judaism which wants it to be for Jews only, but Kabbalist rabbis like Baal Shem Tov, who opened it to everyone, agree with us. The process began before us, and we took it one step forward – to everyone, any way, anytime."

There were quite a few who didn't like your approach.

"At first my parents really suffered, even before it was opened to 'non-Jews'. The fact that women could join too began another war, because there were those who wanted to leave it closed.

"They say Kabbalah is only for men over 40, so the second war was to open it to all ages, and then bring in gentiles too. There was a decision to go all the way with it. The wars began as early as the 1970s, when we only had 150 students, but hey, we're still here."

And why should gentiles reach out to Judaism?

"It's a chance to broaden one's horizons. The Americans are a sort of herd, going where everyone's going. We believe people have to choose their own way. If it works for them they should use it, and if not they shouldn’t use it. There is a sort of openness in studying. There are famous people who are studying, which helps people connect."

Not just a red string

Last year, Rabbi Berg was named one of America's 50 leading rabbis, reaching the fourth place on a list published by Newsweek magazine.

"I won't lie to you. When I saw my name on this list I felt very good with myself," he admits. "It's important to me because it gives a good feeling to people, to my students, who understand that they are part of something special. After feeling good with yourself for five minutes, you realize that it's mostly good for the people who are with you, so they can feel like they are part of something which isn't always attacked."

Indeed, the Kabbalah Centers are subject to widespread criticism. People say they extort money from people, advance a Torah which is distancing itself from Judaism, pretend to predict the future and adopt Christian symbols. There have even been claims that some of the content being taught in the classes is linked to anti-Semitism.

Rabbi Berg is unfazed. "Most of what you read about our center was written in a negative context. People talk about money and stuff like that. There are cases in which the publications are not completely in our favor, so it's nice to read or see something that is also positive."

Do the many celebrities that come to you attract fans as well?

"There are people who come because of that, but not as much as you would think. In the United States, the biggest increase in the number of students was after the 9/11 attacks and not when Madonna started studying. But it clearly pushed the numbers up a bit – when Madonna goes on tour there's an increase, but most of the time things that happen in the world help more than a new star who joins us."

Do you think people in Israel understand that Kabbalah is not just about a red string?

"I think so. At first they put a magnifying class on Madonna's wrist with the red string, but slowly they started noticing other things as well. Today they talk about the way Kabbalah affected her after 12 years. She takes it seriously, and people see that it's more than a red string on her hand."

So there are no red strings?

"There are, but it's not the most important thing."

He has Madonna, Mick Jagger and Donna Karan on his speed dial. When Ashton Kutcher and Demi Moore decided to get married, they asked him to perform the ceremony. As he visits Israel to promote his new book, Rabbi Yehuda Berg explains why Judaism should be shared with non-Jews too.