Discounts on bank accounts, mobile phone rates, public transportation, a  psychometric exam course, and infant products are just a few of the benefits that companies offer haredim in Israel. These discounts come on top of the government subsidies for day care, kindergarten, arnona (local property tax), yeshiva students, and more.

It pays to be haredi 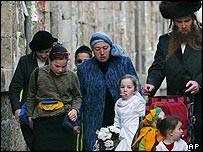 
The benefits are based on companies' marketing calculations to capture haredi consumers. In effect, ordinary consumers, who pay the full price, are subsidizing the haredim. In other words, religiosity pays.

Some companies said in response that the befits for the haredim are comparable to benefits for soldiers, and see nothing wrong with that. Other companies claim that the benefits are personalized adjustments to the needs of the target audience, which raises questions about the size of the discounts for the haredim compared with other groups of consumers.

It is no wonder that other consumers, for whom their faith is no less important, are embittered.

Cellular telephones The battle among mobile carriers for haredim has escalated, after Cellcom Israel Ltd. (NYSE:CEL; TASE:CEL) launched an especially favorable sales campaign for them -- 2,000 call-minutes at NIS 40 per month -- and deducting monthly payments for haredi customers who abandon Mirs Communications Ltd. In response to a complaint by Mirs, in an unprecedented act, the Ministry of Communications ordered Cellcom to cease or amend the campaign.

018 Xfone Communications Ltd. does not bother with euphemisms. It calls it discounted rates for haredim the "Yeshiva Students Price List", which has no fixed fee a rate of NIS 0.17-0.18 per call-minute.

Banks Advertisements at Bank Leumi (TASE: LUMI) branches are offering yeshiva students a NIS 1,500 grant in 36 installments if they open an account. The small print states that the benefit is also valid for students. The bank says that there are correspondent benefits for other communities, and that yeshiva students are offered the student benefit, and that haredim in IDF yeshivot hesder units are offered soldiers' benefits.

Infant products The large haredi families incur heavy infant care costs, and companies know that there is money to be made with targeted marketing and sales promotions campaigns.

Intersun (1996) Ltd., a marketer of infant care products, offers a range of products to meet haredi needs, such as for glatt kosher foods. It also offers discounts and coupons for haredim via the media. Intersun CEO Ronen Hasidim says, "We found it proper to expand our business in sectors where we saw potential and the ability to meet existential needs for infant care and cleaning products." Pharmacy chains amend their sales campaigns according to the community at specific stores. For example, New Pharm Drugstores Ltd. pharmacies in the haredi city of Bnei Brak offer glatt kosher Materna infant formula at discounted prices. The company makes it clear that these discounts are not offered at other branches.

Recycling, psychometric and more Haredim are offered one agora more per bottle to encourage them to recycle. The collection center in Jerusalem's haredi Mea Shearim neighborhood pays NIS 0.31 per bottle, compared with the normal rate of NIS 0.30. ELA Recycling Company says that this is a private initiative.

A quarter of students taking psychometric exams are haredim, and companies have seen the potential. Calls by a customers to Kidum offered a NIS 1,000 lower quote for a girl who did National Service than a girl who served in the IDF, and High-Q offered a 50 percent discount for a girl who did National Service, compared with an discount of 20-50 percent for a discharged female soldier. Ankori offered the same price to both.

Public transport Bus fares for haredim are substantially lower than regular fares Be Free Israel reports, even though the High Court of Justice has ruled that gender-based segregation on buses is illegal. Fares on the 972 local bus between Haifa and Jerusalem is NIS 28, compared with NIS 45 on the 940 direct and 947 express routes between the cities. Egged Israel Transport Cooperative Society Ltd. claims that the reduced fare is for passengers embarking or disembarking at stops en route.

It is important to note that the Ministry of Transport sets bus fares.

Car leasing Car rental companies offer discounts to people who do not drive on the Sabbath. Dan Vehicle and Transportation Ltd. (Avis Israel) (TASE: DVT) offers discounts to haredim. Budget Rent-a-Car does the same. A call by a customer to the Avis offices in Bnei Brak and Tel Aviv was offered a NIS 350 discount for not driving on the Sabbath.

Arnona and Mortgages Be Free Israel is also fighting the effort by Minister of Housing and Construction Ariel Atias of Shas to obtain reduced mortgages. Be Free Israel says, "The criteria for receiving the mortgage benefits are clearly and deliberately tailored for the haredim in terms of areas where it will apply, family size, etc. The solution is to raise these issue on the public agenda and to protest, especially in the contemporary unstable political conditions in which public pressure has influence." Haredi families with at least eight members are also eligible to discounts of 70-90 percent on arnona (local property tax), depending on income. In Jerusalem, most haredim, who account for a third of the total population, resulting in the city's secular Jewish population bearing the tax burden.

Haredi boarding schools, daycare centers and kindergartens receiving government financing also receive discounts, depending on the number of children in a family and its income.

Discounts on bank accounts, mobile phone rates, public transportation, a  psychometric exam course, and infant products are just a few of the benefits that companies offer haredim in Israel. These discounts come on top of the government subsidies for day care, kindergarten, arnona (local property tax), yeshiva students, and more.