Helmer Toro, who founded New York's H&H Bagels in 1972, blamed the economy, litigation and a recent loss of rental income for prompting the manufacturer's bankruptcy filing. 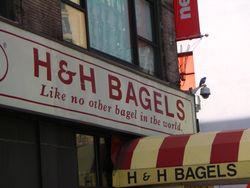 (Bloomberg) - A bagel maker run by the founder of New York's H&H Bagels, who was sentenced to jail last year for failing to pay taxes, filed for bankruptcy protection, citing the economy.

Helmer Toro, who started H&H in 1972, also blamed litigation, the loss of rental income from a tenant and construction costs for the bankruptcy of Garden Operation Realty LP in a Chapter 11 petition filed Thursday in U.S. Bankruptcy Court in Manhattan. The petition lists “bagel manufacturer” under “nature of business.”

“This situation was the product of the poor economic conditions affecting the country since September of 2008, which have resulted in an extremely difficult time in the industry,” Mr. Toro said in the filing. Mr. Toro was ordered last year to spend 50 weekends in jail after failing to pay more than $500,000 in employee withholding and unemployment insurance taxes. The founder, whose store's slogan is “Like no other bagels in the world,” also was told by a New York state judge to pay restitution.

A plant in New Jersey faced “imminent padlocking” by a rent receiver, according to court papers. All Dutch Baking Co., a tenant, also declared bankruptcy, depriving the company of rental income.

Mr. Toro opened the first H&H store at Broadway and West 80th Street on Manhattan's Upper West Side, according to the company website, HHbagels.com. He is listed in the Chapter 11 petition as the president of the general partner of Garden Operation Realty, which shares an address with H&H's main office at 2239 Broadway.

Garden Operation listed both assets and debts of $1 million to $10 million. Randy Kornfeld, an attorney for the company, declined to comment. Mr. Toro couldn't be reached by phone for comment at H&H's main office.

Helmer Toro, who founded New York's H&H Bagels in 1972, blamed the economy, litigation and a recent loss of rental income for prompting the manufacturer's bankruptcy filing.