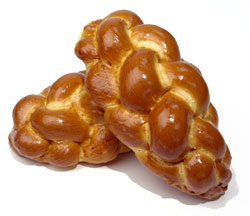 The ultra-Orthodox haven't got a ghost of a chance. They too stand under the wave of capitalist wealth, shopping has killed off the influence of their leadership, and the full supermarket cart has taken the place of the so-called "full basket" of Jewish tradition. The supermarket chains - and not secular Israeli culture or non-religious subjects in the core school curriculum - produced this stream of ultra-Orthodox women running blindly ahead. It seems that the ultra-Orthodox world has taken the worst thing it could from Israeli secularism, the juice at the bottom of the garbage bag: hot brand names and publicity, the world of the minor celebrity.

Nearly 10,000 ultra-Orthodox women (Haredi men were forbidden to enter ) crowded into the carnival of shopping that accompanied the competition. Already in the elevator I ran into one of the contestants, Merav Segal and her stuffed vegetables; she asked me to use my journalistic connections to help her win. "Life would be boring if not for competition," she told me.

I made my way toward a rather impressive fake waterfall. At the entrance, women received a plastic bag stamped with the huge logo of a tuna fish company. In the pool beside the waterfall, a cardboard box of the Yesh supermarket chain was half floating, half sinking. I watched it for a while.

The event's public relations guy pleaded with me to take a look at the world's largest challah, 100 meters long. "On the radio they said 140 meters," someone remarked. The PR man, Yeshurun Turgeman, explained that the loaf was not included in the Guinness Book of World Records because it doesn't have a challah category. When I hinted at anti-Semitic motives, he agreed immediately. I approached the man guarding the challah, which contains 100 eggs according to the press release, and asked for a bite. "It has to be filmed by Channel 2. Afterwards, maybe," he said.

The large hall was dotted with booths sponsored by various brands. Sometimes it was hard to walk because the place was so crowded. Most of the brand names were trying to win the affection of the ultra-Orthodox public. Coca-Cola made the biggest effort of all. They produced a film of three yeshiva students singing in Yiddish above a cloud of smoke, which in every respect looked like a display about the Holocaust.

The smartest were from a knife company; they did not try to adapt themselves to the ways of the ultra-Orthodox and their booth was the most popular of all. They hired good-looking salesmen in secular clothing, for example, a model dressed like a knight, with a ponytail and an open shirt. The young ultra-Orthodox women crowded in to catch a glimpse of the curls on his chest, in the guise of knife shoppers who wanted to hear his pointless tips. They pretended that their dream was to chop parsley, but they were really fantasizing about the muscular young man with the ponytail. "They are ordinary people. Religious, secular, it makes no difference," Koby of the knife company explained its winning ideology. And he was right: The ultra-Orthodox are just like the secular, that is, just as bad as they are.

In the center of the hall, more than a thousand good women quietly viewed a live cooking show that was broadcast over the radio and screened via closed circuit television. It was a real shtick - watching TV without watching TV.

In Ramallah on the Muslim holiday of Ramadan, I had also seen a cooking show filmed in a shopping mall. It is much more powerful that way. Here a huge crowd watched fervently while the pinkish moderator Toby Spiegel told Bible stories involving kitchens, like that of Eliezer, whose dish someone tried to poison. I'm almost sure that this story cannot be found in my copy of the Bible. "If the angel had not saved him from the poison, there would have been no Isaac and no tribes [of Israel]," she said, while above her was no angel, not even a seraph, but an ad for a non-fattening oil.

Yaffa Matis, who was actually from Tel Aviv, complained: "It's not fair that it's so crowded here. I complained about it to someone and he said that it's not the organizers' fault. He didn't want to listen. I didn't pay NIS 30 to stand on my feet. In my opinion, they made a lot of money."

PR man Turgeman introduced radio broadcaster Miri Zurgar to me, calling her the "Odetta of the ultra-Orthodox community," as if Odetta, an Israeli newspaper columnist who specializes in household tips, was the winner of a Nobel Prize. Before Zurgar ran off helter-skelter to the soup show, she explained who she is: "[The food company] Osem did a survey of 10,000 people, asking who is the ultra-Orthodox community's chef, and 98 percent chose me."