« Who Should Care For The Children Of A Chabad Drug Addict? | Main | Prominent Haredi Rabbi Charged With Rape, Sexual Abuse, And Other Charges » 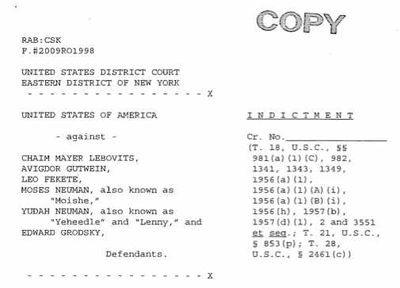 I reported these arrests yesterday afternoon, mentioning the two Neumans, Lebovits and Gutwein and having no information other than the arrests being for insurance fraud.

But now we know what what Chaim Mayer Lebovits, Avigdor Gutwein, Leo Fekete, Moses "Moishe" Neuman, Yudah "Yeheedle" "Lenny" Neuman, and Edward Grodsky allegedly did according to the US Attorney: 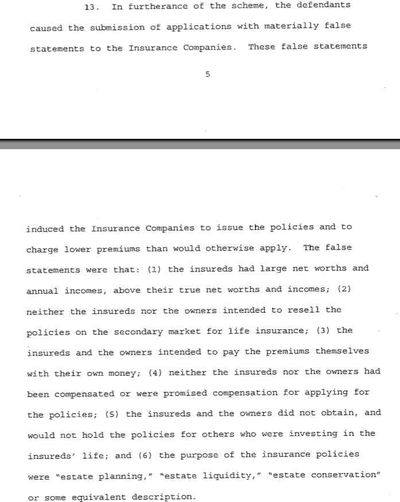 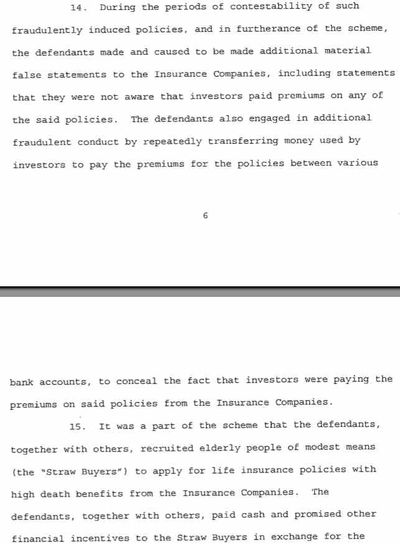 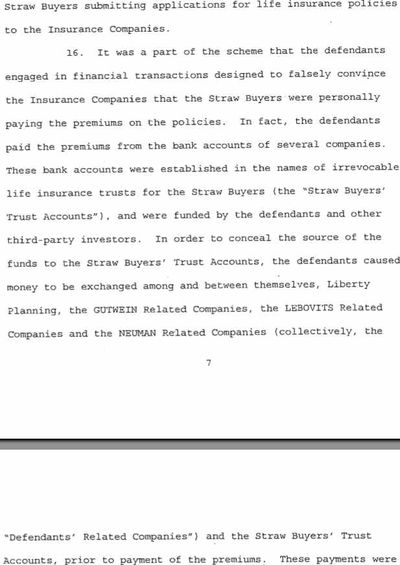 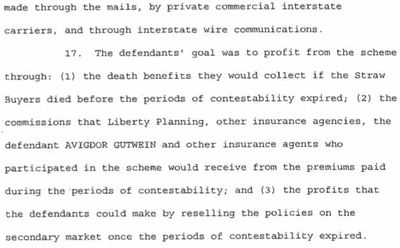 The entire indictment as a PDF file:

Greedy life-insurance agents took out huge policies on penniless seniors, and then asked them to fake illnesses so they'd seem more likely to die, as part of a $500 million scam, investigators said yesterday.

The fraudsters sought to cheat not only the insurance companies, from whom they reaped huge commissions, but also investors looking to buy the policies on the secondary market, postal inspectors said in mail-fraud charges filed against eight defendants in Brooklyn federal court.

Chaim Mayer Lebovits, of Liberty Planning, in Monsey, NY, facilitated the purchase of policies on behalf of the elderly "straw buyers," according to the complaint.

He and seven other defendants were released on bail yesterday.

A Monsey insurance company and several of its associates have been charged by the U.S. Attorney's Office in Brooklyn with bilking $550 million from insurance companies through fraud.

The statements falsely told the insurance companies that their straw clients were wealthy.

The eight people charged in the case received large commissions on the policies and defrauded investors looking to buy the policies on the secondary market, according to the indictment.

He is accused of facilitating the purchase of policies on behalf of elderly straw clients.

While Lebovits is not associated with the Patrick Farm project, members of the Lebovits family are seeking to develop a 208-acre parcel off Routes 202 and 306 in Ramapo.

All eight were released on bail after being arraigned Thursday in U.S. District Court in Brooklyn. The U.S. Attorney's Office for the Eastern District's jurisdiction covers Brooklyn, Staten Island, Queens, Nassau County and Suffolk County.

"It was a part of the scheme that the organizers engaged in financial transactions designed to falsely convince the insurance companies that the straw buyers were paying the premiums on the policies," the indictment states.

The indictment states that the organizers paid the premiums from the bank accounts of companies that they controlled.

Their goal was to profit from death benefits they would collect if their phony buyers died before the periods of contestability expired, through commissions that Liberty Planning, other agencies and agents would receive from the premiums and the profits from reselling the policies on the secondary market.

The U.S. Attorney's Office is seeking at least $550 million from those charged, arguing they are jointly and separately liable.