Chabad's Yeshiva Academy, a small Jewish school that has operated continuously in the city since 1959, owes tens of thousands of dollars to the city and others, has failed to comply with city regulations and faces liens and foreclosures on its properties, among other problems. 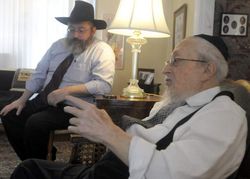 WORCESTER — Yeshiva Academy, a small Jewish school that has operated continuously in the city since 1959, owes tens of thousands of dollars to the city and others, has failed to comply with city regulations and faces liens and foreclosures on its properties, among other problems.

As enrollment and support from Jewish benefactors dropped in recent years, the school has tried other gambits to raise money, including a failed attempt last year to win $500,000 in a Kohl's Department Stores contest, a move that led to the school threatening to sue the Menomonee Falls, Wis.-based retailer and filing complaints against the company in the 49 states in which Kohl's does business.

But the tax-exempt Yeshiva — which is part of the worldwide ultra-Orthodox Chabad-Lubavitch movement, run by Russian Jews and their descendants based in Brooklyn, N.Y. — has long had problems paying its bills, to the city and others.

“The school, thank God, is in good shape educationally and spiritually, but I can't say that financially,” said Rabbi Hershel Fogelman, 89, longtime dean of the school and a well-known city figure. “People give, but they don't give anywhere what they used to give.”

The school, formally called Yeshiva Achei Tmimim Academy, also has had persistent conflicts with city inspection officials and residents, who have complained about unkempt conditions on its 2-acre campus near busy Newton Square, such as allegedly burning pressure-treated wood in a bonfire and leaking oil.

Several modular classroom trailers, meant to be temporary when they were installed in the late 1990s, now are run-down, and debris such as old wooden pallets can be seen around the worn main building. Workers shoveled snow off the flat roof last week, and water leaks were visible inside the school.

In the last decade, the school has been flagged during inspections for building code violations such as out-of-date fire extinguishers and nonworking exit signs, and a parent complained of mold and a pervasive musty smell causing children to be sick, according to city records.

At least a decade ago, the administration headed by Rabbi Fogelman largely stopped paying the school's water and sewer bills, records from the city treasurer-collector's office show.

Yeshiva has been persistently delinquent on water and sewer bills charged not only to the old brick school, but also to the rabbi's residence on a nearby block and for a building long used as a dormitory for a girls' high school run by Yeshiva. The high school was once foreclosed on by the city, but Yeshiva bought it back, according to Thomas F. Zidelis, Worcester's chief financial officer.

Today, Yeshiva owes the city $7,445 in back water and sewer charges on the Newton Avenue school, which also is used as a synagogue; and $13,176 on the rabbi's residence at 24 Creswell Road.

Over the years, city records show, Yeshiva has made virtually no water and sewer payments to the city. The city, in turn, has periodically sold off the accrued water and sewer liens at full value to private companies.

As for shutting off service to the properties, Mr. Zidelis said his policy is not to terminate water and sewer service unless outstanding current bills total more than $2,000 annually. Yeshiva and its properties have usually stayed below that threshold.

Meanwhile, in addition to its overdue obligations to the city, Yeshiva owed the National Grid electric utility $31,400 as of May 2010, according to court records. Tallage LLC, a Boston real estate investment company that bought water and sewer liens on the 9 Midland St. dormitory building, filed a notice of foreclosure on the property on Nov. 12.

Rabbi Fogelman's son, Mendel, 55, Yeshiva's director of development and assistant to the rabbi, was unclear in his answer last week when asked about whether the electric bill had since been paid.

“We've been dealing with that. We're in the middle of dealing with that like everybody in our situation. Times are tough. With God's help things will eventually turn for the better,” he said.

The rabbi and his son said they intend to pay their bills to the city some day. But they said they have had to make tough financial decisions, such as meeting payroll for the school's employees.

The pre-K through Grade 8 school has about 80 students, with about another 30 attending the girls' Bais Chana High School at 15 Midland St. About 85 percent of the students are on financial aid, the Fogelmans said.

“It's at the top of our priority list,” Mendel Fogelman said of the water and sewer bills. “It's just that we have to make the choice between paying 31 people or the water bill. It's a rough choice.

The school ran afoul of the Department of Inspectional Services last year. For more than a year after the city passed an ordinance in 2007 requiring all commercial kitchens to install modern grease traps, the school had still not complied, according to inspection records.

After school administrators repeatedly ignored permit suspension letters and failed to show up at hearings, city officials issued an ultimatum last winter: “All food preparation at the facility shall cease on March 31, 2010, if a permit to operate a food service establishment is not obtained prior to that date.”

As of last week, the school still did not have proper grease traps, according to city officials.

Amanda M. Wilson, director of housing and health inspections, said that while the school has installed two undersize grease traps, they are still not compliant with the Fats, Oil and Grease ordinance, so the city has refused to issue a food service permit for this year. The Yeshiva kitchen is one of the few in the city that still does not meet the ordinance, she said.

“We have not issued the current permit because the establishment is not FOG compliant,” Ms. Wilson said in an e-mail. “A closure notice was delivered for the establishment to cease all food operations due to the FOG issue. Since then the department agreed that only one of the sinks/dishwasher equipment would be required to be FOG complaint as Jewish Law requires the separation of meat and dairy.”

“Revocation is the next natural step in enforcement,” Ms. Wilson added.

City officials said that while they also have the option to revoke the food permit or other permits because Yeshiva is delinquent on water and sewer bills, they have exercised their discretion not to.

Mr. Fogelman said the school is in the midst of upgrading the grease traps, though he noted that he thinks the ordinance is heavy-handed because the school doesn't cook meals but mostly serves sandwiches and heats up frozen kosher pizza and macaroni and cheese.

Supporters of Yeshiva and Rabbi Fogelman were shocked to learn about the school's habit of not paying its bills to the city.

Former Worcester state senator and businessman Arthur E. Chase, a longtime financial contributor, said the rabbi and the school have done many good things in the community, including taking on as students many poor Russian immigrants for little or no tuition.

“I know Rabbi Fogelman well, and know him to be one of the kindest and generous persons,” Mr. Chase said. “They've been so helpful, but he doesn't do his own bookkeeping.

“The rabbi takes nothing for himself,” Mr. Chase added. “I've always thought they've been good, but you have to obey the law, too.”

Critics of the Chabad movement, though, say the Worcester Lubavitchers (as Chabad adherents are often called) have acted similarly to other Lubavitchers across the country who have been embroiled in disputes with government officials, primarily over zoning issues.

“This is business as usual for Chabad. This is how Lubavitchers in America have operated, by flouting municipal regulations and zoning and to be in arrears on their taxes,” said Stephen G. Bloom, a professor of journalism at the University of Iowa.

Mr. Bloom is the author of “Postville,” a 2000 book chronicling the conflicts between small town Iowans and Lubavitchers from New York who came there to run the biggest kosher meat-processing plant in the United States.

When municipal officials crack down, “their response is you're an anti-Semite,” said Mr. Bloom, who is Jewish.

“They are shameless, not only at self-promotion, but also harassing anyone who gets in their way,” Mr. Rosenberg said.

“I won't even dignify them,” he said, declining to comment further.

For the financially strapped Yeshiva, the $10 million Kohl's contest — which awarded 20 grants of $500,000 each to schools across the country that marshaled the most Facebook votes from supporters — was a godsend at first.

But the competition turned into a nightmare after Yeshiva got shut out of the top 20 after initially being the eighth-highest, and by some reports, the third-highest vote-getter.

Twelve Jewish schools, most of them affiliated with Chabad, won $500,000 prizes, along with six Christian and Catholic schools. Two public schools were winners.

The Yeshiva eagerly snapped into action as soon as Kohl's unveiled the charity competition last year.

The school's leaders marshaled supporters online in conjunction with other Chabad schools and through direct mail campaigns, hired three marketing companies to assist the school in voting, and gathered votes at shopping malls, college campuses and youth sports events.

The Milwaukee Sentinel newspaper reported in November that the Worcester Yeshiva and the United Lubavitcher Yeshiva in Brooklyn were originally in the top 20 but were not certified as winners. The newspaper later reported that Yeshiva was complaining to the attorneys general because it is “upset that its good name has been damaged by reports suggesting it broke the rules of the contest.”

Kohl's officials said the company hired a third-party contest administration company in New Jersey to sort out the winners and “verify adherence to contest rules and regulations including voting accuracy,” Vicki Shamion, a senior Kohl's spokeswoman, told the Sentinel.

“The organization used the same contest criteria and verified votes for all schools. Any votes determined invalid per rules and regulations were not counted, per contest rules, therefore changing the final vote count,” Ms. Shamion said.

Meanwhile, Mendel Fogelman said Yeshiva intends to sue Kohl's for allegedly unfairly depriving the school of the $500,000. He declined to elaborate, referring questions to a lawyer, but provided a written statement.

“We tried to get answers from Kohl's on several occasions, but all of our questions went unanswered, so we entered into formal litigation,” Mr. Fogelman said in the statement. The school's Florida-based lawyer, Lior Leser, declined to comment.

In a complaint the school filed Dec. 14 with Attorney General Martha Coakley's office, the school alleges that the voter certification process was unfair.

“We were notified that all votes needed to be certified. This process, never outlined in the rules, resulted in our school being dropped,” the complaint reads. “No explanation. No process followed to assure fair process. Without rules, a sweepstakes is no different from gambling. We won according to the rules, we should be awarded the prize. We turn to the state of Massachusetts for help.”

Mendel Fogelman said the $500,000 would have helped Yeshiva with its debts.

Chabad's Yeshiva Academy, a small Jewish school that has operated continuously in the city since 1959, owes tens of thousands of dollars to the city and others, has failed to comply with city regulations and faces liens and foreclosures on its properties, among other problems.