« Haredim Allegedly Carried Out Theft Of Milan Synagogue Judaica Worth $1.5 Million | Main | Smicha Is Not A Prerequisite For Being The Army's Top Rabbi »

Gay and Orthodox: And Cleaving Strongly to Both
An Often Hidden Community Goes Beyond the Trembling
By Jay Michaelson • Forward 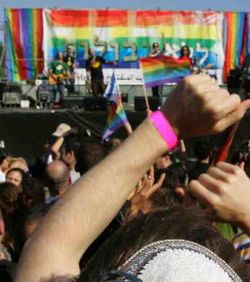 In January, I went to a shabbaton with 140 lesbian, gay, bisexual, and transgender Orthodox Jews. Yes, Virginia, there are gay Orthodox Jews. There always have been. And while I have been working in the LGBT Jewish community for many years, I saw more courage, endurance and strength that weekend than I ever have before.

The answer does not have to do with how we parse the words of Leviticus 18:22. What non-Orthodox Jews often fail to understand is that living an Orthodox life is less about espousing a certain doctrine than it is a way of living, a lifestyle. (I say this as someone who lived an Orthodox life for just slightly less than a decade myself.) Of course, beliefs are part of that lifestyle. But unlike for our Christian brothers and sisters, they are less important than how one lives.

But the hermeneutics really is secondary. What’s primary is that these are Jews who, by birth or by choice, find themselves in an Orthodox lifestyle and don’t want to give it up. It may seem cognitively dissonant, but Modern Orthodoxy is built on cognitive dissonance. Every educated person knows that the Bible is likely the product of human hands, for example. Yet, to be modern and Orthodox is to accept a dialectical tension between the dictates of reason and those of faith, which, in this case, hold that God wrote the Torah. Most Modern Orthodox Jews I know do not resolve this tension. They accept it, and get on with the important business of living. Likewise, many gay Orthodox Jews have not resolved the tensions between being gay and being Orthodox. But they go on living the lives they feel called to live.

In fact, the very existence of this gay Orthodox community is a testimony to the resilience of Jewish values on the one hand, and individual wills on the other. First, it shows how powerful the traditional life can be. Surely these are people who have every reason to leave Orthodoxy behind. Yet there is something here that they deeply, powerfully want. One wonders how many liberal Jews would endure the same kind of challenges these Orthodox Jews face every day to hold fast to their way of life.

Second, this community, and its first-ever shabbaton, is a powerful testimony to the strength of the human spirit. That weekend in January, I met a lesbian couple sending their child to Orthodox yeshiva despite the teasing, and worse, that he gets. I met frum transgender women, one of whom said, “I grew up on the other side of the mechitzah.” I met people who flew in from South America and Europe; they heard about the event online and said they wouldn’t miss it for the world. One woman said, “I’ve been waiting for this event for 35 years.” These are people who are just categorically refusing to be separated from their Yiddishkeit or alienated from their sexuality. It’s no surprise that half the crowd was weeping during Kabbalat Shabbat.

It took courage even to show up. Between one-third and half of the attendees were still “in the closet.” Many had been sent to abusive and ineffective “reparative therapy” by well-meaning but ignorant rabbis and parents. Many would be disowned by their families if their attendance at the shabbaton had been made public. In 2011, it’s amazing to think that to come to a weekend of Jewish community can itself be an act of bravery. But it can be.

The weekend was sponsored by a partnership called Eshel, named after the Eshel Avraham, the tamarisk tree under which Abraham welcomed visitors. (By way of disclosure, the organization I founded, Nehirim, is one of the partners in Eshel, together with the Gay & Lesbian Yeshiva and Day School Alumni Association, JQYouth, OrthoDykes and Tirtzah: A Community of Frum Queer Women, although I am not on the Eshel program board.) In a sense, Eshel is the complement to the historic statement on homosexuality that was issued last summer and signed by more than 200 Orthodox rabbis. That statement didn’t change the Halacha, and said things that some LGBT people found offensive. But what the statement also said is, “We acknowledge that you are here, and we commit to making your lives less miserable.”

The 140 attendees at the Eshel shabbaton were, in a way, saying the same thing. No one there was proposing changes to Jewish law. If that ever happens in the Orthodox world, it will be the culmination of a long, internal process of consideration, not traditional, bang-on-the-doors activism. And it won’t happen soon. Rather, all the Eshel community was saying is hinenu, “We’re here.” And while everyone there was inspired by Sandi Dubowski’s 2001 film “Trembling Before G-d,” they’re not just trembling anymore.

Just a week before the Eshel shabbaton, a Haredi man told me, at the Limmud NY conference, that my love for my fiancé is no different from the lust a man might experience for a sheep. There is no difference between homosexuality and bestiality, he said. I asked him how he knew. How did he know the contents of my heart? Had he listened to the stories of actual gay and lesbian people? Would he like to hear mine?

He quickly changed the subject. Had he been willing to listen, I would have told him about the holiness of my love, the spirituality of my life, and how sexuality and spirituality are doorways to the highest forms of love. I would not have parsed Leviticus for him; I know that for him, what I, a non-Orthodox non-rabbi, thinks about Leviticus is spectacularly unimportant. But I would have told him my story.

Iris Murdoch said of anti-gay bias that “the facts which will cure this prejudice belong to the ordinary talk of ordinary people.” Outsiders like me have a long list of things we might want to change about the Orthodox world. I’d certainly like the Rabbinical Council of America to withdraw its support from JONAH (“Jews Offering New Alternatives for Healing”), an unaccredited, ineffective and abusive “reparative therapy” organization headed by an ex-felon. (JONAH has steadfastly refused to state its rates of success, for obvious reasons, and the RCA still has not responded to the allegations of abuse on the part of JONAH-licensed “life coaches.”) And I’d like frum Jews to feel comfortable not lying to their families and communities.

But what non-Orthodox folks like me want is really beside the point. The LGBT Orthodox community is coming together on its own, and it is not debating policy; it is telling its stories, supporting one another, and showing that there is more to being a gay Orthodox Jew than trembling. There is also living. And that may be the most powerful act of all. L’Chaim!

Posted at 02:22 PM in Haredim, Homophobia and its Discontents, MO & Chardal | Permalink