The Jerusalem Post reports Berger's victory, but Heeb Magazine has a pre-victory announcement interview with Berger. Here's an excerpt: 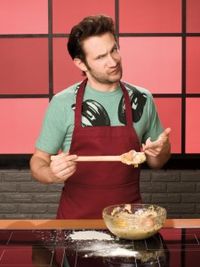 …You grew up in an Orthodox household in Brooklyn, but tell me a little bit about your upbringing. What was your neighborhood like? Were you friends with non-Jews? Were your parents strict?

I grew up in Boro Park, and my parents were from Israel, so while my father wore a shtreimel and appeared like a regular Hasid, we were a tad more liberal. I think in 5th grade my mom wanted us to get a semi-decent education so she wisely tore us out of our Hasidic school and put is in a less Hasidish yeshiva. As is the norm in these neighborhoods, I had no non-Jewish friends and was even discouraged from hanging out with kids whose yarmulke wasn’t up to par (leather and knitted of course not being materials appreciated by God). I was the oldest child and was showered with love from my parents. I really can’t complain about anything they did, or positions they took and enforced. They are simply the product of a system set in motion hundreds of years ago that hasn’t been checked.

Describe to me the first time you ate something that wasn’t kosher? What was it? How did it feel?

I will never forget, it was a chicken cutlet. I love chicken, it’s my favorite food and especially schnitzel like my mom makes. I was so nervous, I recall asking my friends so many questions, they thought I was crazy; is it a normal chicken? There’s like no pig in it? Is there anything like in between the bread crumbs and the chicken? Then I had my first bite and it was just a damn chicken cutlet. I was surprised, but the transition was fluid. I have tons of ex-frum friends who have mental blocks and feel nauseous when food isn’t kosher, that was never the case for me. I don’t get their disorder.…