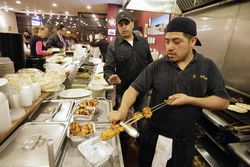 At Taboun Grill in Skokie, the Sunday dinner hour is controlled chaos. A cashier is ringing up checks with one hand and handing over takeout orders with the other. The wait staff rushes around delivering orders to packed tables. Behind a counter, flames flare up as a cook throws skewers of meat and vegetables on the grill.

The work can be hard, but the employees know they will be treated well. Taboun is one of six Kosher restaurants and catering companies in the Chicago area that have been awarded the Tav HaYosher (Hebrew for ethical seal), certifying that they treat their workers fairly.

Tav HaYosher is part of the ethical kashrut movement, a sort of fair trade kosher that is beginning to establish a toehold locally. Kosher establishments that receive the seal meet an ethical labor standard, including paying workers at least minimum wage, giving them appropriate breaks and time off, and maintain a safe working environment. A similar standard has recently been developed for kosher food producers.

Developed by Orthodox social justice organization Uri L'Tzedek, the Tav HaYosher certification program was a response to the widespread fraud and violations of child labor, immigration and environmental policies at Agriprocessor, the country's largest kosher slaughterhouse and meatpacking company, based in Postville, Iowa. A federal judge last year sentenced its chief executive to 27 years for financial fraud.

"We think that kosher is so sacred, that it denotes that extra care taken for godly purposes, that the same care should be taken in every area," Weiss said. "The largest kosher slaughterhouse cared so much about the food but didn't care so much about the people. This is about changing the narrative."

To date, more than 75 kosher establishments have been certified in nine states in the U.S. as well as Canada.

Rabbi Asher Lopatin, of the Modern Orthodox Anshe Sholom B'nai Israel Congregation in Chicago, calls himself a "cheerleader" for the Tav HaYosher program.

"We're trying to create a society and a way of behavior that is God-like and we have to be respectful of all people. It is my responsibility as a Jew to make sure (the world) is fair," he said.

Lopatin and other supporters of the ethical kashrut (kosher) movement find deep justification in the Torah and ancient Jewish sources, which explicitly prohibit the mistreatment of workers and show concern for animals — even giving them the Sabbath as a day of rest — and for the environment. They say the Jewish community has a special responsibility to make sure kosher food manufacturers not only follow Jewish ritual law, which kosher certifying bodies ensure, but the best of Jewish ethical law and tradition, as well.

"The idea is to create standards that offer a holistic approach to the sanctity of food as it's understood in the Torah. Not only will the food be ritually kosher, but also ethically created," said Siegel, senior rabbi at Anshe Emet Synagogue, a conservative congregation in Chicago's Lakeview community.

"We need to protect our good name, and ensure that no more Postvilles take place."

The certification will be tested later this month at two local kosher food companies, including Wheeling-based Orval Kent.

"The idea that this is being done in the food industry in the U.S. is pretty groundbreaking," said Orval Kent CEO Steve Silk, who is also a Hekhsher Tzedek board member.

Lopatin and Siegel said they hope ethical kashrut will become a consumer standard, like organic or fair trade. Ideally, they said, a shopper going to buy Passover matzo, for instance, would look at all the different brands for Hekhsher Tzedek's certificate or someone getting married would choose among the caterers that carry the Tav HaYosher. But that is still a ways off.

About 40 percent of food in supermarkets is certified kosher, said Joe Regenstein, Cornell University professor of food science, who helped developed the Hekhsher Tzedek standards. Regenstein, who is the only non-Muslim member of the Park Ridge-based Islamic Food and Nutrition Council of America, said there is some interest in the Muslim community in developing similar ethical standards. His vision is to eventually establish a wide faith-based ethical food body that spans the major Western and Eastern religions.

"Tying this to a framework that it is faith-based gives it tremendous power and grounding," he said.

But the movement has taken time to take hold in Chicago.

"Not everyone was happy about this at first," said Srulie owner Getter, referring to the Tav HaYosher. Many restaurant owners didn't understand why a New York organization they never heard of wanted to inspect their restaurants, she said. In the case of the Hekhsher Tzedek, some thought it was an alternative kosher certification system.

The Chicago Rabbinical Council, one of the leading U.S. kosher certification bodies, is officially neutral on both, said council kashrut administrator Sholem Fishbane. "We're very pro-ethics and keeping American law and Jewish law, and we're very proud of that," Fishbane said. "But in Chicago, this isn't such a blazing issue."

Several kosher restaurant owners and employees agreed. Eileen Jacobs, owner of Kosher Gourmet in Skokie, has the Tav HaYosher certificate because "I think people need to care about how other people are treated in life."