« Haredim Arrested In Insurance Scam | Main | Who Should Care For The Children Of A Chabad Drug Addict? »

According to leading haredi rabbis, God is causing unrest in Arab and Muslim countries in order to show Israeli leaders they are not in control, are not powerful, and that their treatment of haredim is wrong.

Prominent rabbis from the Lithuanian ultra-Orthodox sector have offered their own curious interpretations for the upheaval that is spreading through the Middle East, stating that the events are a clear proof that a higher power is at work. 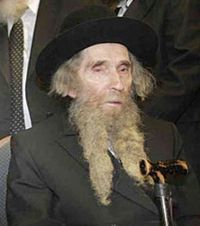 The cellular portal Haredim, which offered a collection of responses on the matter, quoted Rabbi Aharon Leib Steinman, the leader of the ultra-Orthodox Lithuanian sector in Bnei Brak, as blaming the instability in the region on contemptuous attitudes towards Torah study.

Steinman explained that the sages of the Talmud teach that there is a connection between Torah study and the existence of the world.

"God does great and strange things in the world, to make them deal with the (disasters) instead of looking for ways to mind those observing the Torah and the mitzvot," he said. "Because if they don't study, it will continue to move closer to us."

Rabbi Chaim Kanievsky, an unconventional Lithuanian leader who is believed to have mystic powers, offered a different explanation. "It is evident that many unnatural things are happening," he said. "People have come to me and said that it's 'Gog and Magog'. We cannot know. But it's probable that any unrest that God creates shows that the Messiah is coming, and that we must begin to prepare for it and become stronger."

Another prominent rabbi, Michel Yehuda Lefkowitz, is certain that God is causing the turmoil in order to put the people in their place.

"God goes and humiliates (those feeling) sinful pride," he said. "At first there was this little fire here, and a state that thought that it is big and strong suddenly needed help from the entire world. Not a war, nothing special, just a small fire.

"When they continued to think that they are smart, and see everything and understand what to do and how to do it, God came and disturbed the nations, and here they are, scared again because they could not predict such a big thing, and again they do not know what to do," he added. "God is laughing at them, waiting to see when they will understand and become wiser."

The one who does not see that God is running the world, Lefkowitz concluded, is not evil, but a fool.

According to leading haredi rabbis, God is causing unrest in Arab and Muslim countries in order to show Israeli leaders they are not in control, are not powerful, and that their treatment of haredim is wrong.