Are unions kosher? Does a community have a responsibility to ensure public servants are decently paid? Does Orthodox Judaism have anything to say about these questions? About the crisis in Wisconsin? It does – but it is being said by a non-Orthodox rabbi.

A few weeks ago, I gave a talk about Jewish perspectives on workers and unions at a Connecticut synagogue. Afterward, a retiree thanked me for speaking positively about unions. “I worked in the public sector my whole career,” she said. “If it weren’t for my pension, I wouldn’t be able to survive right now.”

In the last few months, public-sector unions have increasingly come under attack as states struggle to fulfill pension obligations. More and more, these unions are being accused of selfishly bringing state and local governments to the brink of bankruptcy.

Are these critiques justified?

The first question is how we should value those who devote their careers to serving the public need. This is a topic about which Judaism has much to say.

Traditional synagogues include in the Shabbat liturgy a prayer for “all those who occupy themselves faithfully with the needs of the community” — a formulation that includes both volunteers and those employed by the community. Moses Maimonides mandated that key communal workers, such as scribes and judges, be paid enough to support themselves and their families. Commenting on this Maimonidean requirement, Rabbi Chaim David Halevy, the Sephardic chief rabbi of Tel Aviv from 1973 to 1998, explained that the workers must be paid sufficiently “in order for them to devote their full energies to their important tasks… without concerns about the needs of their families weighing on them.”

In America, it has become acceptable to denigrate public employees as under-qualified workers who collect undeservedly high salaries and benefits. But the reality is far different. A recent study by the Economic Policy Institute found that workers in the public sector actually earn slightly less than private-sector workers with similar educational backgrounds. And as for those supposedly lavish pensions, the average pension of a public-sector worker in the United States is $19,000 a year — hardly enough to spend retirement soaking up rays on a yacht. 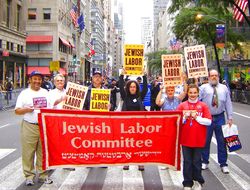 Critics say that public-sector employees’ pensions are sapping state and federal budgets. It’s true that pensions are expensive, but these pensions actually account for a very small share of state budgets — on average, about 3.8%.

In the economic crisis, pension funds lost value, just like all of our savings accounts. Yet rather than focusing on the real cause of the economic crisis — namely, the bad behavior of Wall Street bankers, who continue to pay themselves multi-million dollar bonuses even as unemployment figures remain stubbornly high — there is an effort to divert attention by attacking public employees and their unions. Most dramatically, Governor Scott Walker of Wisconsin has proposed broad legislation that would strip public unions of most of their collective bargaining rights.

Once upon a time, Americans recognized unions as the best means for ensuring that regular, hard-working people earned enough to support themselves. Union-negotiated salaries allowed factory workers, service industry employees and government workers to propel themselves into the middle class. Union health benefits have saved both lives and labor costs; employees able to seek preventative medical care stay healthy longer, and also miss fewer days of work. Pensions have enabled workers to enjoy a dignified retirement.

In the words of Rabbi Ben-Zion Uzziel (1880-1953), a former Sephardic chief rabbi of Israel, Jewish law permits unions “in order that the individual worker not be left on his own, to the point that he hires himself out for a low wage in order to satisfy his hunger and that of his family with a bit of bread and water and with a dark and dingy home.”

Unions, of course, are not perfect institutions. And union contracts are also not perfect. But the response to specific issues in union contracts or in the financing of pensions or benefits should not be to strip workers of all of their negotiating power. Instead, we should try to address these issues within the framework of the collective bargaining process.

The attack on public-sector employees reflects a growing disrespect for those who devote their lives to ensuring that our streets are clean, our children are educated and our Medicare benefits are administered correctly. It represents nothing less than an attempt to break the last bastion of organized workers’ strength in the United States.

In times like these, we need to have honest public conversations about how best to allocate communal funds. But the current attack on public workers does not further this conversation. Instead, this assault threatens all of our livelihoods, our ability to have a voice at work and our chance to build a just society together.

Rabbi Jill Jacobs is the author of “There Shall Be No Needy: Pursuing Social Justice Through Jewish Law and Tradition” (Jewish Lights, 2009).

Posted at 07:15 AM in Current Affairs, Ethics | Permalink

Are unions kosher? Does a community have a responsibility to ensure public servants are decently paid? Does Orthodox Judaism have anything to say about these questions? About the crisis in Wisconsin? It does – but it is being said by a non-Orthodox rabbi.