"The Jewish people who have the money should feel a guilt trip. They have plenty of money," he said. "I see them in their Rolls Royces, I go to their million-dollar houses and they say, 'I don't have the money, Rabbi.' "

Another Orthodox Jewish congregation has sought protection from federal bankruptcy laws due to outstanding bank debts. 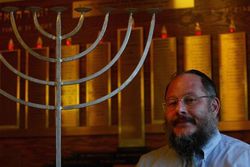 In an interview Tuesday, Rabbi Shloime Ezagui said the Chabad has been unable to make loan payments because contributions from patrons dropped off during the recession.

Chabad House Lubavitch, located on Prosperity Farms Road, is the second Palm Beach County Chabad to seek protection from U.S. bankruptcy laws. Last June, Congregation Chabad-Lubavitch of Boynton Beach filed Chapter 11, in a bid to stop the foreclosure of its property. After a donor stepped in to pay off part of a $3.8 million overdue loan to the Chabad's bank lender, the foreclosure lawsuit was settled and the Chabad emerged from bankruptcy in December.

Chabad House Lubavitch also has bank debt. Among the debts owed is $538,577 outstanding on a loan to TD Bank, the U.S. arm of Toronto-Dominion Bank. The loan was originally made by Riverside National Bank of Fort Pierce, which was closed by federal bank regulators last April. Riverside's assets were taken over by TD Bank.

Also listed is an outstanding loan balance of $165,000 to Floridian Community Bank of Fort Lauderdale.

Both loans went to fund the Chabad's religious and community centers, according to Ezagui.

Ezagui said wealthy benefactors stopped contributing to the Chabad House Lubavitch when the stock market crashed in late 2008 - and they have not resumed their contributions, even though the Dow now has substantially recovered.

Ezagui said wealthy people are making excuses not to give.

"The Jewish people who have the money should feel a guilt tripThey have plenty of money," he said. "I see them in their Rolls Royces, I go to their million-dollar houses and they say, 'I don't have the money, Rabbi.' "

Ezagui said they should do a better job of supporting their community, especially as the gap between rich and poor widens and the need for help grows ever greater.

Just this past week, Ezagui said he heard pleas for help from a troubled woman trying to manage through a difficult divorce and a man who said he was hungry.

In 1999 Ezagui established an 11,000-square-foot Chabad center that now offers everything from an after-school program to Kosher meals to a mikvah, a ritual purifying pool for women.

Ezagui said the Chabad decided to file Chapter 11 on Monday because an important hearing on its litigation with TD Bank was set for Tuesday . Ezague said the Chapter 11 filing is not a long-term solution but a temporary halt to the foreclosure lawsuit, which threatens the Chabad's property.

Robert Furr, the Chabad's bankruptcy lawyer, said Chabads are particularly vulnerable to drop-offs in donations because they do not have require regular dues from members, unlike other Jewish houses of worship.

"(The filing) gives them time to get the word out in the community that they need help," Furr said. "We hope there will be some angels out there who will come forth. They provide a great service to the community."

"The Jewish people who have the money should feel a guilt trip. They have plenty of money," he said. "I see them in their Rolls Royces, I go to their million-dollar houses and they say, 'I don't have the money, Rabbi.' "