An American Trapped In Egypt

A letter from an American friend currently trapped in Egypt.

A female friend writes me from Egypt: 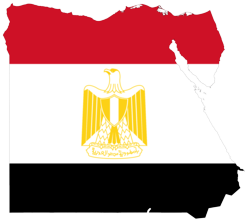 A friend of mine who is a young British tourist and stayed at my hotel with his mother and father was taken by police to the station.  He was surrounded by 8 to 10 men and questioned/interrogated for at least 4 hours. This, because he was friendly with a local Egyptian who was pro-Democracy.

They took his cell phone and went through it and questioned why he have that guy's number.  It is normal to talk to Egyptians and how can we know who is who?  Then they found my number in his cell and wanted to know who I am.…

I got so nervous that I would not go back to my hotel because he said they have been monitoring him there, his conversations and his Emails.  I called the Ambassador who visited me immediately and got a call from the Cairo [American] Embassy to let them know that they are taking tourists off the street and holding them and interrogating them.

I did not know that you can go to jail for what you say!  I was wondering why when I mentioned to some guys that I can't wait till they get rid of that bad man....they all freaked out.  Then one came with his cell phone and took a whole bunch of photos of me.  His smile was more of a smirk and I felt something wrong.

Later, I came to my hotel and told the tour manager…what happened.  He said the British guy had been at the Internet sending secret letters, codes last night.  That astonished me because it sounds like some "nut case" talking.  I told him it is a ridiculous thought and anyways the guy was not "that smart".  He is the same guy who got scammed for 600 Egyptian Pounds, falling for a sob story.  I was there with him at the Internet Cafe last night.

Now I have received several calls from him and I am completely paranoid.  My Ambassador said that the fact that he was released 4 hours later is a good sign.  They can keep you for 48 hours, then 7 days, then renew the hold every 2 weeks.  The Ambassador said to call if it happens because they usually allow you a cell phone.  I better renew my credit now!  (Just in case.)

I have nothing to hide, which I told the Ambassador but I see that things here can be twisted and Americans are simply out-spoken and we do not realize that it is illegal.  The Ambassador finally said I may as well go back to my hotel because if they want to find me, they will no matter what.  The whole place is cooperating with the President [Mubarak], the citizens and everyone else are in the snich business.  Undercover are everywhere.  What a strange world.  I never thought that there were such things as "brain police"!!!

An American Trapped In Egypt

A letter from an American friend currently trapped in Egypt.