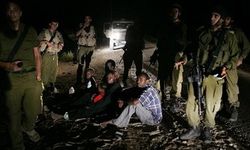 “I was a virgin when I arrived in the desert. During the first few times that I was raped, I cried and resisted, but that didn’t help. They wouldn’t leave me alone. After that, I stopped resisting.”

The testimony of A.I.S, a 21-year-old Eritrean woman, is part of a report released by the Hotline for Migrant Workers on Wednesday detailing horrifying ordeals reportedly suffered by African migrants to Israel at the hands of their Beduin smugglers in the Sinai Peninsula.

The report, titled “The Dead of the Wilderness,” is full of tales of rape, torture, murder, extortion and near-starvation compiled during interviews with 60 African migrants. The 24 women and 36 men, mainly from Eritrea, reported suffering severe brutality on their way to Israel.

Most of the interviews were conducted by the Hotline at the Saharonim Prison, where the migrants were held after arriving in the country.

In 2010, 11,763 people were smuggled into Israel across the Egyptian border, according to a report by the Knesset Research and Information Center. Most, if not all, of these people paid exorbitant sums in the thousands of dollars to Beduin smugglers, and many reportedly found themselves held hostage later by the smugglers until their families could pay a ransom. Many of those held for ransom were reportedly subjected to repeated torture and rape – used against both women and men – to force their families to send more money to end their ordeal.

However, the suffering doesn’t always end with the payment of ransom, according to the report, which cites the case of some 18 men who were forced into slave labor to build sprawling Sinai mansions for two of the traffickers. The report also cites a study previously compiled by Every- One Group, a collection of Italian human rights groups, which found that migrants were threatened with having their organs cut out and sold.

It said that four young Eritreans had been taken to a pirate medical clinic, where each had a kidney removed.

None of the four was ever seen again, the report stated.

The Hotline report portrays the Beduin smugglers as tending to rape their captives, and states that according to the testimonies collected, it appears that the majority of the approximately 5,000 women held by smugglers in the Sinai last year were raped during their time there, many of them repeatedly. Of the 24 women interviewed for the report, 17 stated that they had been raped – an especially high number, the report says, considering that rape victims are typically very reluctant to come forward, particularly those from conservative African societies, where victims of sexual assault are often ostracized from their communities.

The experience of 19-year-old Eritrean T.L.S. illustrates the helplessness of such captives.

“When I arrived in Sinai, the smuggler sold me, along with a group of other people, to another smuggler named Abdullah. Abdullah demanded an additional $10,000 from me. I had no way to raise that sum of money. Abdullah raped me for five days, and two other smugglers raped me as well. I wanted to resist, but I had no strength, and the smugglers nearly strangled me during the rape. As a result of all these rapes, I got pregnant, and I’m now seven months pregnant,” T.L.S. told the Hotline in her testimony. “Only after eight months was my father able to send the smugglers $5,000; they released me and allowed me to cross the border to Israel,” she recounted. “I must have an abortion. My husband should not know what happened to me in the desert, and I must not give birth to this child.”

M.N., a 35-year-old Sudanese Christian, told the Hotline the Beduin captors “would take the women and rape them daily… The women cried and yelled in a way that kept me up at night, for the entire time we were there. After three months there, I asked the women, through the woman who spoke English, and learned that none of them had menstruated on time. Some didn’t realize that they were pregnant.”

Rape is also used as a weapon of terror and control against men, with the report stating, “One of the men admitted that several men in his group were raped as well, as punishment for trying to prevent the rape of the young women.”

The report also describes the prison camps reportedly operated by the Beduin smugglers, where the migrants are tortured until their families send their ransoms or until enough new migrants arrive that there is simply no room to keep them any longer. The report further states that there is a network of African “collaborators” located in Israel, who exert pressure on migrants in Israel so they will send money to release their relatives being held in Sinai.

The migrants’ testimonies indicate that the smugglers, who are mainly members of Beduin gangs but who employ some Sudanese, use Eritrean, Somalian, Nigerian and Sudanese nationals as guards for the camp – at times because the guards were once captives themselves and were not able to pay ransom.

The report notes that the level of cruelty dealt to the captives is linked in some part to religion. It asserts that Muslim Turks and Ghanaians who came to Israel by way of the same smuggling routes were not tortured or held for ransom, and were only required to pay $1,000-$1,400 each, as opposed to the $2,500- $3,000 smuggling fees reportedly demanded of Christian and Animist migrants from Africa.

The Hotline’s report is consistent with the findings of an update issued in December 2010 by Physicians for Human Rights, entitled “Hostages, Torture, and Rape in the Sinai Desert.”

The update stated that “of 165 abortions facilitated by the clinic between January-November 2010, PHR-Israel suspects that half were requested by women who were sexually assaulted in the Sinai. During the same period, 1,303 women have been referred for gynecological treatment, here too, a large percentage as a result of the trauma endured in Sinai. Harsh experiences in the Sinai have also translated into an increased number of patients seeking rehabilitative services from our Open Clinic.”

PHR stated that a subsequent questionnaire it had distributed to African migrants had found that “Eritreans and Ethiopians encountered pronounced harm, more so than any other group questioned.”

Sigal Rozen, head of the Hotline for Migrant Workers, told The Jerusalem Post on Wednesday that “the situation has just become more and more difficult. The report only includes testimonies taken before the end of 2010. In recent weeks, ever since the turmoil broke out in Egypt, we began hearing even worse stories.” According to Rozen, “we have heard that people are being kidnapped from police stations in Sinai and held for ransom, as well as testimonies that indicate that Egyptian soldiers have captured migrants who escaped and sold them back to their captors.”

When asked what Israel could do in response to crimes taking place in Sinai, Rozen said that “Israel must find the [smugglers’] collaborators here and put them on trial. Also, we hope the state will treat the victims like victims, and not just put them in jail and then release them onto the street without jobs or any right to receive medical or psychological treatment.”

She said she also expected the international community to exert whatever pressure it could on those responsible.

Rozen noted that a number of testimonies revealed that some of the torture and abuse had taken place within as little as a 30-minute walk from the border with Israel – indicating that not all of the tragic events detailed in the report were that far out of reach or out of sight.

Nic Schlagman, who manages a Tel Aviv shelter for African migrants operated by the African Refugee Development Center (ARDC), said the organization knew fully well the rampant, systematic sexual violence suffered by female migrants in the Sinai desert, who he said arrived at the shelter “emotional ly and physically shattered.”

“The ARDC is dealing with the issue of abortions for women on a weekly basis, and we are not the only organization doing this work,” he said. “For us, the process is not just helping to organize the procedure, but also a process of rehabilitation and support.”

According to a report released earlier this month by the Population, Immigration and Borders Authority, there were 33,273 “illegal infiltrators” in Israel as of December 23, 2010, all of whom arrived by way of the porous southern border with Egypt. Of these, 19,442 were from Eritrea, 8,256 were from Sudan, and 5,575 were from other countries in Africa.

Whether these people are simply economic migrants or refugees from actual danger ir starvation, they take great risks to get to Israel.

Israel reats them poorly – although still much better than the horrific way these refugees are treated in Egypt.

But being marginally better than horrible isn't good enough.

Israel can have a humane refugee policy that also deals with Israel's concern about the Jewish nature of the state.

It's time Israel did it.