Has the next great Southern author been found? 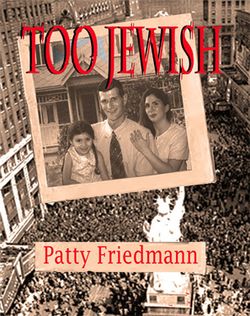 A poignant and touching story, TOO JEWISH provides a remarkable (and entertaining) glimpse of New Orleans in the 50s—especially the Uptown Jewish community, literary territory that we believe Friedmann, quite simply, owns.

Based on Friedmann’s own personal story, it tells the story of young, brainy Bernie Cooper, who escapes the Nazis before the start of World War II and ends up in New Orleans. He thinks at first that he’s landed softly, almost immediately finding love with Letty, not only a nice Jewish girl, but fifth-generation Southern upper crust. But happily ever after isn’t exactly in the equation—because Bernie next encounters a kind of discrimination he never expected. It seems he’s a bit too Jewish for certain American Jews—some of them in his own family!

Recently we found this note from none other than Walker Percy:

"I make no claim to prophetic powers, yet I make bold to predict that the next Southern literary revival will be led by a Jewish mother, which is to say, a shrewd self-possessed woman with a sharp eye and a cunning retentive mind who sees the small triumphs and tragedies around her and has her own secret method of rendering it, with an art all her own and yet not unrelated to Welty, O'Connor, and Porter."

Was Walker Percy a prophet?

But I do know that Patty Friedmann may be the greatest New Orleans author of the past quarter century.

Friedmann's previous books are wonderful. Side Effects and Secondhand Smoke are especially good. They capture New Orleans better than anyone since Pulitzer Prize winner John Kennedy Toole's A Confederacy of Dunces.

Friedmann has been reviewed by the New York Times and is considered a New Orleans treasure.

If you like New Orleans, if you're interested in it's Jewish community or Southern Jewish life or simply the rhythms and cadence of a America's most unique city, you'll love Too Jewish. And even if you don't give a hoot about NOLA and its Jews, buy Too Jewish for another reason: it's a great read.

Has the next great Southern author been found?