During the Holocaust, Chabad played a unique and sometimes troublesome role. This role is not widely known, although it has been explored in scholarly articles and books, most notably Bryan Mark Rigg's Rescued From The Reich, published by Yale University Press, and on a small number of blogs, including Failed Messiah.

Lets itemize Chabad's behavior during the Holocaust, drawn largely from Rigg's book (except for #1), so the discussion points will be clear:

1. In the early Summer of 1939, Rabbi Yosef Yitzchok Schneersohn (here after referred to by the acronym of his name, the Rayyatz), the sixth grand rabbi or rebbe of Chabad-Lubavitch, was asked by parents of several American students about sending their children to study in 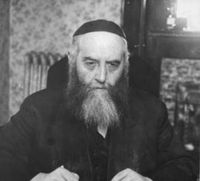 Chabad's main yeshiva (rabbinical school) in a suburb of Warsaw, Poland. The parents were afraid to send their children because many people believed a war would take place between Germany and its neighbors, including Poland.

The Rayyatz answered that it was safe to send the students and he personally guaranteed the parents that there would be no war.

On August 1, Germany invaded Poland. The Jewish orphanage across the street was hit by German shells. The yeshiva students watched in horror as children's body parts flew through the air.

The Rayyatz, who was based near the yeshiva, fled, leaving his students – including the young Americans – to fend for themselves. Many ended up escaping Europe by tagging along with the Mir Yeshiva, which was able to escape by going to, of all places, Japan.

2. The Rayyatz was rescued in 1940 by the US Government, which had been convinced to act by Chabad followers' claims that the Rayyatz was the "Jewish pope" of all "protestant Jews." The US was able to do this because it was not yet at war with Germany.

When the Rayyatz was brought to safety in Latvia, he asked US officials to go back to Poland and rescue his books, his household goods, and his silver. He made no mention of rescuing his yeshiva students or any other Jews or oppressed minorities.

3. From Latvia, the Rayyatz went to New York City, where he was given a hero's welcome by his followers and others. On disembarking from the ship that brought him to these shores, the Rayyatz declared that America would not be different, meaning that the hasidism and shtetl ultra-Orthodoxy of Eastern Europe would be established here.

The Rayyatz settled in Crown Heights, Brooklyn and began to work with the Vaad Hatzolah, the ultra-Orthodox rescue organization that was, among other things, financially supporting the Mir Yeshiva in Shanghai.

But the Rayyatz had a falling out with the Vaad Hatzolah over money. The Rayyatz expected that whatever amount of money he raised in their name would be used for support or rescue of his followers alone – something no other hasidic rebbe or non-hasidic Orthodox or ultra-Orthodox leader expected. The Vaad Hatzolah used the money where it felt it could do the most good, or where there was the most immediate need, regardless of the affiliation.

The Rayyatz stopped working with the Vaad Hatzolah and launched his own rescue organization which he advertised in Chabad publications distributed throughout the NYC area. The ads stressed teh need to save the lives of those Jews trapped in Europe.

But Chabad-Lubavitch had little success in saving anyone, far less than the successes of the Vaad Hatzolah.

The Rayyatz continued to raise money for rescue, but he spent that money supporting his Brooklyn yeshiva.

At the same time, the Rayyatz began a campaign attacking the Vaad Hatzolah for working with non-Orthodox Jewish leaders – who he blamed for causing the Holocaust by leading Jews astray – and for what he considered to be "desecration" of Jewish law. That "descration" was raising money on Shabbat, the Jewish Sabbath, to save lives – something Jewish law not only permits, but mandates.

In those days, the only time large numbers of Jews could be reached quickly was on Shabbat and Jewish holidays when they congreagated in synagogues. Leading rabbis allowed the Vaad Hatzolah to raise funds during prayer services and many rabbis – including hasidic rabbis and other ultra-Orthodox rabbis – would send their congregants home to write checks or get money, and have then immediately return to the synagogue where a Vaad Hatzolah representative would collect the money and take it to the Vaad Hatzolah office. This involved multiple violations of Shabbat.

But Jewish law has an overriding factor that trumps Shabbat law and most other Jewish laws – saving life. In fact, Jews are mandated under Jewish law to violate Shabbat to save lives.

The Rayyatz criticized the Vaad Hatzolah's efforts, claiming they would only make things worse and that only a full return of Jews to strictly keeping the Torah's commandments and Jewish law would bring the messiah who would then save the Jews of Europe. Earthly efforts like the Vaad Hatzolah's would not be effective, the Rayyatz insisted, and would delay the coming of the messiah.

4. During the war, the Rayyatz wrote letters to US President Franklin Delano Roosevelt. While he mentioned the war and his own rescue facilitated by the US, the Rayyatz never asked the president to do anything to help the Jews of Europe let alone rescue anyone.

The Rabbinical Center of Europe was started by Chabad to provide an umbrella group for its rabbis in Europe and to poach members whenever possible from the established rabbinic organization of Europe, the Conference of European Rabbis.

The RCE's rabbis are not historians. They are not trained in Holocaust studies. And they most certainly will not be honest about Chabad's role during the Holocaust.

Yet Arutz 7 is reporting that the RCE asked for support from the Task Force for International Cooperation on Holocaust Education, Remembrance, and Research (ITF) to teach the Holocaust in Europe's public schools and universities. The ITF is an intergovernmental body whose purpose, according to Arutz 7, is to "place political and social leaders' support behind the need for Holocaust education, remembrance, and research both nationally and internationally."

“Many European students, whether in high-school or an institute of higher education, are either partially or completely unfamiliar with the Holocaust, Jews or the local Jewish community,” Rabbi Arye Goldberg, deputy director of the RCE, told Arutz 7. “In many cases this will result in a negative perception of Jews. The RCE rabbis will be able to represent the Jewish identity and what it means to be a recognizable Jew in Europe today, 65 years after the Holocaust. The lessons of the Holocaust are not for the past but for present and future tolerance and prejudice. If these children meet an open and identifiable Jewish leader from their town and city it will break down barriers and allow for a long-term dialogue.”

What the RCE wants to do is admirable and should be supported.

But at the same time, Chabad's troublesome behavior during the Holocaust should be publicized and discussed.

Chabad is now the largest international Jewish organization with a combined yearly budget estimated at more than $1 billion and representation in almost every country in the world, and at the very least, Jews have the right to know what Chabad's theology and behavior was during that awful time.

It is also distressing to note that the David S. Wyman Institute for Holocaust Studies, run by Dr. Rafael Medoff, has spent much ink attacking Reform leader Rabbi Stephen S. Wise's behavior during the Holocaust, but has so far not spilled even one drop of ink to discuss Chabad's.

I've asked Medoff over the years to deal with this issue. Medoff always tells me he's busy working on something more pressing, and that he can't tackle Chabad's Holocaust behavior right now.

This may be true.

But becuase Medoff is the author of a book, The Deafening Silence/American Jewish Leaders and the Holocaust, that trashes liberal Jewish leaders like Wise, and because Medoff and Wyman further trashed Wise in their book on Peter Bergson, A Race Against Death: Peter Bergson, America, and the Holocaust, there is an obligation for Medoff to report the truth about an Orthodox Jewish leader, the "pope" of all "protestant" Jews, Rabbi Yosef Yitzchok Schneersohn.

That he has not done so in the more than six years since Rigg's book Rescued from the Reich was first published is troubling, and points to what can reasonably be perceived to be bias on Medoff's part and on the part of the Wyman Institute that he runs.

Medoff is Orthodox and politically right wing. That is relevant here only because of his failure to report Orthodox misbehavior during the Holocaust, specifically Chabad's misbehavior. Chabad is, of course, Orthodox and it is famously right wing politically, especially with regard to Israel, and so is Medoff. And this, too, adds to the suspicion that politics, rather than historical truth, are guiding Medoff's behavior on this issue.

Chabad and the Holocaust: An Index of Posts.