« Beit Shammai In Our Days | Main | For The Jobless, A Place To Reconnect »

Anna King, 20, puts off a promising international modeling career to serve in the army. The Jerusalem-born model is one of only 100 Christians serving in IDF. 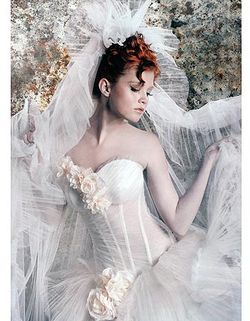 Khaki is the new black: Some prefer easy money and the glitzy cat walk, while others opt for grease, sand and military uniform. At this very moment, Anna King – a Christian model from Jerusalem – could have been on the line between New York and Beijing, skipping from photo shoots to runway shows. But King chose to become a Hummer operator at the national center for ground forces training (MALI).

King was born 20 year ago in Jerusalem. Her grandfather is a member of the ascetic Amish sect, and the deep love for Israel was bestowed on her by her parents, who met during a Christian festival that was held in Israel.

Her father established the International Christian Embassy in Jerusalem – an organization that supports Israel and encouraged wider Christian understanding of Biblical Zionism.

During her high school studies, King got an offer that changed her life. "I went to get a haircut with my mother," she recalls. "The barber and his wife, who designs wedding dresses, asked me if I modeled. They said it was good money and showed me some catalogs."

King began her modeling career shooting evening and wedding gowns for a local catalog; shortly thereafter, she signed a contract with a modeling agency.

"When I got my enlistment order I was contemplating whether to stay in Israel," King admits.

"They wanted me to model for another big catalog and offered to fly me to Beijing and the United States and sign me on a big modeling contract," she adds.

But despite the great temptation, King decided to complete her military service. "I know that modeling offers good money, but it was important for me to enlist. My parents didn’t think I would go through with it, but they supported me.

"During basic training I would come home with stacks of gun shells in my pocket. My mom was mortified, but she slowly got used to it," King notes.

Currently, King is one of some 100 Christians serving in the IDF. After completing her basic training at the southern Zeelim military base, King was given the position of a Hummer operator.

Although she is a self-proclaimed "spoiled only child," King's army service is far from pampering. "Drills can last from midnight until the first hours of the morning, and sometimes we can sleep a whole week in a pup tent," she said.

In six months, after she completes 20 months of military service, King will receive her Israeli citizenship. Shortly thereafter, she will be released from the IDF, and would be able to switch back from camouflage to makeup.

Anna King, 20, puts off a promising international modeling career to serve in the army. The Jerusalem-born model is one of only 100 Christians serving in IDF.