« Protect Organ Donation | Main | Last Week, Sergeant Salman Amar Saved More Than 100 Israelis From Death, But Rabbis Do Not Want You Rent A Home To Him »

Three Arab gang members and their rabbi ringleader were arrested after an undercover investigation reveals they were cooperating to steal, refurbish and re-sell Torah scrolls at knock-down prices. Other suspects, alleged to have helped the rabbi refurbish the scrolls, were also arrested. 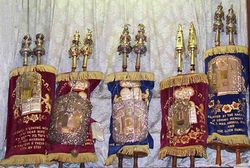 Cross-religious and nationality cooperation in the crime world. At the end of a long undercover investigation, a rabbi and three Arabs were arrested over the weekend over suspicions that they stole dozens of Torah scrolls.

It is suspected that the rabbi and a number of additional religious figures ordered dozens of stolen books from the Arab gang members, some at a cost of NIS 100,000 ($28,190) a unit. The four were arrested and the police are expected to arrest additional suspects involved in the case.

The investigation was conducted over the last few weeks with undercover policemen waiting for the gang to make a mistake that would expose them. The whole affair began following the accumulation of intelligence info saying that Torah scrolls were available on the haredi market for reduced prices.

After launching the investigation, the findings led investigators to a rabbi from the town of Elad, who according to suspicions ran the book trafficking ring. As the investigation progressed, it was made clear that the rabbi used to 'order' books from a gang of Arab burglars that gave him scrolls stolen from synagogues.

The rabbi paid just dozens of shekels for each scroll and after 'refurbishing' them, sold them on to various religious circles, which weren't aware of the fact that they were purchasing stolen property.

In calls recorded by the police it became clear that the rabbi was aware of the fact that the gang he was in contact with was stealing the scrolls from synagogues but was apparently unconcerned with the fact.

While conducting surveillance of the gang members, police observed them carrying out preparation work for a break in to a synagogue in the center of Israel. After enough evidence was collected, the rabbi was arrested along with three members of the gang. 70 Torah scrolls, possibly stolen, were also caught.

Additional suspects, who helped to refurbish and sell the books after they were stolen, were also arrested. The court decided to extends the remand of the rabbi and the three gang members.

Posted at 10:15 AM in Crime, Litigation, etc., Haredim, Israel | Permalink

Three Arab gang members and their rabbi ringleader were arrested after an undercover investigation reveals they were cooperating to steal, refurbish and re-sell Torah scrolls at knock-down prices. Other suspects, alleged to have helped the rabbi refurbish the scrolls, were also arrested.