Inappropriate? A Chabad Rabbi Complains About Chabad's Unending Quest For PR, And Its Sleazy Attempts To Link Itself To National Tragedies In Order To Raise Money Off The Pain And Suffering Of The Victims

"After Shabbos we learned that while we were dining at the Shabbos table full of guests, the 'rabbi' of the reform temple where Giffords is a member (her father was Jewish) was busy being interviewed by various TV stations. It wasn't until Shabbos ended that we were schlepped into this story."

The following revealing article was posted on the Chabad news site COLLive for a brief time and then removed. But you can still read Google's cached version of the story. And I've posted a PDF of the cached version below, as well.

The article lays bare Chabad's constant attempts to link all national tragedies and events to Chabad in ways that make the victims or the heroes appear to be friends of Chabad, in order for Chabad to trade off the suffering of those victims: 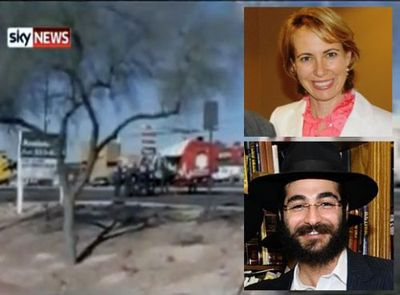 Was Mrs. Giffords Your Friend?
Yehuda Ceitlin, whom you know as the editor of COLlive but is also a Chabad Shliach in Tucson, shares what transpired after Congresswoman Gabrielle Giffords was shot on Shabbos.
By Rabbi Yehuda Ceitlin • COLLive

Those of you who read general news websites surely couldn't miss the story that's dominating the U.S. news of the gun shooting on Shabbos morning at a Safeway supermarket in Tucson (that's in Arizona, by the way).

17 people were shot, 6 of them were killed, among them a 9 year-old girl and a federal judge, John Roll. Congresswoman Gabrielle Giffords, a Democrat who was recently reelected by our neighboring area, was left in critical condition but is expected to survive.

Responsible for this vicious and senseless attack was an anarchist identified by the media as Jared Loughner. According to his MySpace account his favorite books were The Communist Manifesto and Hitler's Mein Kampf.

Giffords was immediately brought to the UMC hospital, which is down the block from my home. While we slowly walked back from shul (following a hefty kiddush) 2 passersby shared with us what happened, noting that they only saw 2 police cars parked at the hospital entrance.

After Shabbos we learned that while we were dining at the Shabbos table full of guests, the "rabbi" of the reform temple where Giffords is a member (her father was Jewish) was busy being interviewed by various TV stations.

It wasn't until Shabbos ended that we were schlepped into this story.

While my father-in-law and Head Shliach in Tucson, Rabbi Yossie Shemtov, holds strong opinions about politics and public policy, he tends to shy away from the media circus.

Right after hearing about the massacre, he strongly condemned the violence to whoever was there to listen, pointing out how immoral it was and how the value of life is so poorly regarded these days. After Shabbos, he also sent condolences to the families.

To us he joked, "Chabad.org would have loved if we gave out bottled water at the scene."

And lo and behold, after Havdalah he checked his Blackberry, to find an email from the news staff at Chabad.org asking if Giffords had any connection to Chabad, was she a guest of any Chabad events, and what was his reaction to the shooting. And if that was not enough, one of their reporters called again later with the same questions.

For those of you who are unfamiliar with the Chabad information site's news section, chabad.org/news (disclosure: I helped create it) is one of the two "official" Chabad news services, who have shown great expertise when it comes to connecting Chabad to any national or international tragedy or disaster or humanitarian crisis.

Should we have told them that friends of ours called after Shabbos declaring that "Chanie's Challas saved our life?" (They were one of the families who received Mrs. Shemtov's freshly baked challas on Friday and thus decided not to drive Shabbos morning to the bakery located near the scene of the shooting).

Or should we have rushed to report that a "Chesed Shel Emes" organization (that deals with Jewish burial) called from New York to inquire about the burial of the two Jews who were among the victims?

Rabbi Shemtov didn't bother, and answered blandly that while we were saddened by the bloodshed, we have no interaction with the congresswoman or her staff that's worth reporting.

I just wonder what does this say about the Chabad establishment-recognized news arm (who always stress that the popular COLlive is "not official"), that they have time for writing about a shooting in Tucson, but haven't yet reported a word about the passing of Rabbi Volf Greenglass, a Chabad legend who educated generations of Chassidim (and yes, Shluchim too, if you need that angle)?

I know they try to produce elaborate articles, but over two weeks have passed since his death.

Could it be that COLlive, the voice of the Lubavitch community (not only the movement's headquarters), is the one website that is proud to be Lubavitch - not because we do good work at Katrina or in the aftermath of the Tsunami - but because we are a people with a mission, inspired by the Rebbe and open about our search for answers and direction since Gimmel Tammuz?

Yes, we proudly adopted the term 'Lubavs' and deal with trends and problems in our community instead of turning our backs as if they don't exist (like some do until the reality slaps them in the face).

Yet, it is COLlive who Lubavitch relies on for the most updated news, thought-provoking articles, daily Torah classes and essays and an alternative to the western culture that is just a click away.

- Rabbi Yehuda Ceitlin, Editor of COLlive.com and Creative Director of "A Jewish Star" singing competition, is the Associate Rabbi at Congregation Young Israel and Director of Development of Chabad of Tucson.

Here is Google's cached version of this story as a PDF file:

Inappropriate? A Chabad Rabbi Complains About Chabad's Unending Quest For PR, And Its Sleazy Attempts To Link Itself To National Tragedies In Order To Raise Money Off The Pain And Suffering Of The Victims

"After Shabbos we learned that while we were dining at the Shabbos table full of guests, the 'rabbi' of the reform temple where Giffords is a member (her father was Jewish) was busy being interviewed by various TV stations. It wasn't until Shabbos ended that we were schlepped into this story."