Bennny Hesse, director of the Ashkenazi Chevra Kadisha in Haifa, was shot to death outside his home in Sinai street on Sunday. According to the police, an assassin stalked Hesse, 67, and shot him several times while his wife stood beside him. 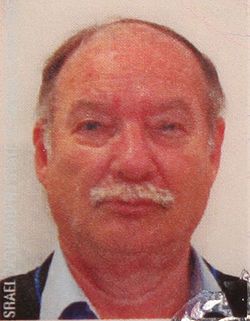 Mysterious murder in Haifa: Bennny Hesse, director of the Ashkenazi Chevra Kadisha in Haifa, was shot to death outside his home in Sinai street on Sunday. According to the police, an assassin stalked Hesse, 67, and shot him several times while his wife stood beside him.

"She cried 'help, help, call the police'," one of the neighbors related. "He couldn't scream anymore."  His death was pronounced a short time after the incident.

Magen David Adom teams arrived at the scene of the shooting where they immediately began to administer CPR. "We found an adult man lying on the floor suffering from a number of bullet wounds in the upper half of his body," a paramedic told Ynet. "We administered CPR for nearly 40 minutes but eventually, the doctor called the time of death."

Haifa's religious community was in shock when news of the murder was revealed. People who worked with the victim refused to believe the news and couldn't imagine why he would be murdered. And yet, this isn't the first time Hesse was attacked. A few years ago anonymous perpetrators threw acid at him.

A large number of Police forces were present at the scene, including regional police commander Shimon Koren. The police have yet to arrest any suspects.

Despite the previous incident, police said as far as they knew Hesse was not being threatened in the past few years.

All leads are being checked at the moment, police said and added that the background to the act was apparently criminal in nature. "At this stage we do not know how the murderer left the scene," a senior Haifa police official said.

Meanwhile, elements in Haifa's religious community said there were bitter debates over the past few years regarding the division of burial plots among the various Chevra Kadisha groups in the city, raising suspicions the murder may be linked to the dispute.

Hesse managed the Ashkenazi Chevra Kadisha in Haifa over the past 20 years, taking over from his father after he had died. A family associate said that although Hesse was affiliated with the "Mizrahi" faction he was also accepted by the haredi and Hasidic sector. A retired lieutenant-colonel Hesse previously served as commander of the Northern Command's burial unit. He left behind a wife, Hana, four children as well as grandchildren.

Science and Technology Minister Daniel Hershkowitz, a Haifa resident, knew Hesse well and arrived at the murder scene Sunday. "He was loved by all. I know that at least twice in the past there have been attempts on his life and all sorts of rumors that it's related to the cemetery," he said. He noted one incident in which Hesse's apartment was arsoned. He described a level-headed, humorous and kind person who was "as straight as an arrow."

The minister said that in the past, after there were attempts on his life, guards were placed outside Hesse's home, but noted he was not aware of any death threats made against him in the past few years.

He also was not aware of any threats on Hesse's life in recent years. "He was devoted to the grieving families, both in terms of halacha and in terms of interpersonal relationship."

Referring to the circumstances which may have led to the murder he said: "It's narrow-mindedness, jealousy, lust and respect." He refused to comment on the claim that the murder may be connected to the burial plot dispute and said the matter was resolved in court.

Rosenthal said that thanks to Hesse the Haifa Chevra Kadisha was one of the most organized establishments in Israel. "There were a lot of people who didn’t like it because 'he cleaned the house up.' The problem is that all is lawless in this country. This is what he tried to prevent, and maybe that's the reason this all happened."

Bennny Hesse, director of the Ashkenazi Chevra Kadisha in Haifa, was shot to death outside his home in Sinai street on Sunday. According to the police, an assassin stalked Hesse, 67, and shot him several times while his wife stood beside him.