« Orthodox And Haredi Israelis Think Knesset Is "Too Democratic" | Main | The Lies Of Rabbi Hershal Schachter? »

After the government extends arrangement awarding monthly living allowances to religious seminary students, social movements and the national university student union continue legal battle against what they call a "shady deal [done] at [the] public's expense." 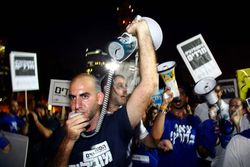 A number of social organizations, including the Students Union, petitioned the High Court of Justice Sunday morning against the government's decision to continue awarding monthly living stipends to religious seminary students.

"Granting scholarships and encouraging yeshiva students to integrate into the job market violates Israeli law and constitutes an unacceptable attempt to bypass the Supreme Court's ruling while trampling over the principle of equality," the petition read.

Since the 1980s stipends have been given to married yeshiva students with three or more children, provided that the students and their wives do not work. In 2010 allowances granted to some 13,000 yeshiva students cost the State NIS 135 million ($37 million).

Last June the High Court of Justice ruled that the stipends were illegal because they discriminate against other segments of Israeli society and ordered that the State not include them in its annual budget.

However, the petitioners claim that according to the government's decision the next four years will see no change in the allocation of funds to yeshiva students who do not work and have three or more children.

Under the government's plan, yeshiva students under the age of 29 with three children, whose income doesn’t exceed NIS 1,200 (about $330) and who do not own a car, will receive a stipend of NIS 1,040 ($287) a month for four years. In the fifth year – the so-called “integration” year – the student will receive 75% of that amount and be allowed to study half-time, and work half-time. After that, he will be expected to enter the workforce.

Another NIS 20 million ($5.5 million) will be set aside for some 2,000 yeshiva students – expected to be the most astute at their studies – who will be allowed to continue studying past the five-year period.

National Students Union Chairman Itzik Shmuli said, "The government failed miserably, both ethically and legally, and this is why we petitioned the High Court, which will have to once again give its opinion on the shady deal at the public's expense. The (stipends) are wrong and discriminatory, and therefore we will continue our public and legal struggle."

Rabbi Uri Regev, director of Hiddush – For Religious Freedom and Equality – said it was unfortunate that the government "is incapable of implementing such a basic and simple principle as equality, even after its policy was rejected by the Supreme Court."

After the government extends arrangement awarding monthly living allowances to religious seminary students, social movements and the national university student union continue legal battle against what they call a "shady deal [done] at [the] public's expense."