« Last Week, Sergeant Salman Amar Saved More Than 100 Israelis From Death, But Rabbis Do Not Want You Rent A Home To Him | Main | Watch Film About Haredi Child Sexual Abuse » 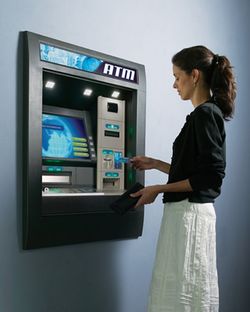 It’s been 500 years since the holy Ari [Isaac Luria], the founder of Lurian Kabbalah, walked the alleys of the Old City of Safed. But he most likely never imagined the enormous popularity his teachings would enjoy, as well as how technology was being employed to spread them: recently an ATM was placed in the city that provides spiritual insight for users.

The ATM works simply: visitors insert their credit card, type their first name and their date of birth according to the secular calendar, and like an ordinary ATM that prints out a bank statement, the Kabbalah ATM prints out within a matter of minutes a page with the Kabbalist explanation of the user’s name.

“The explanation gives details about the special powers of the person, special qualities of their personality and their soul,” explains Eyal Riess, the director of the international Center for Tzfat Kabbalah, “this is based on the teachings of Kabbalah that are thousands of years old. All we did was to come up with the connection to modern technology. The novelty is that nobody has to go to us, anyone can walk in the Old City and get the explanation by self-service.”

Riess said that the matter was a relatively simple development that combined a number of programs already on the market.  “One program is a program for searching dates—when a person types in the secular date, the program finds the Hebrew date,” Riess explains, “and there is also a program that searches for the matrix of the letters of the person’s name in the Torah portion of the week that the person was born.  The third, and most important function, is the energetic meaning of each letter in the name as it appears on the tree of life. The model of the tree of life is 4,000 years old and appears in the original book of Kabbalah attributed to Abraham the Forefather with all the secrets of the creation, the soul, the letters of the alphabet, the zodiac etc.”

So you want to have a spiritual encoding of your name using the ATM? This pleasure will cost you NIS 120.  Because of the great interest in Kabbalah, at this point it is possible to receive the explanation in Hebrew and English. In the future other languages will be possible, such as Spanish and French.

“We’re already working on the next generation,” explains Riess. “The next stage is for people to be able to get details beyond the basic explanations we give today. In the future it will be possible to give details about a person’s family and their lives and not just about the positive forces and the code of their soul.”