The outspoken opposition of IDF-sanctioned conversions by two dozen Chabad rabbis has now put them at odds with Kfar Chabad's rabbi, Mordechai Ashkenazi, who categorically rejects their claims.

R' Ashkenazi At Odds With All Chabad Rabbis
Breaking News: The outspoken opposition of IDF-sanctioned conversions by some two dozen Chabad rabbis, put them at odds with Kfar Chabad's Rabbi Mordechai Shmuel Ashkenazi who categorically rejected their claims.
By David Yisraeli • Chabad Info 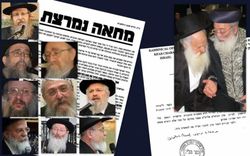 When it was announced that the government was allowing IDF conversions, many in the religious world, including leading Chabad rabbis, raised their voices in opposition.

When the conversions were being sanctioned by the Chief Rabbinate of Israel, the campaign leaders turned to their colleagues in the rabbinate, demanding an explanation for their actions, seen as many in the religious world as a betrayal.

Days ago, tens of rabbis, including senior Chabad rabbis in Israel, signed a harshly worded document that called on the hasty withdrawal from trekking down the path of 'heresy' and 'bringing disaster to the Jewish nation'.

In their letter, the rabbis said they "vigorously oppose the attempts at validating the army conversions".

The rabbis said they saw the actions of the government in collaboration with the chief rabbinate, particularly the Sephardic Chief Rabbi Shlomo Amar, as "damaging and undermining to the strong wall between the Jewish nation and the rest of the world." They said that the new edicts would bring "assimilation to alarming levels."

Attacking the actual conversions, the rabbis said that "great rabbis have clarified the issues" and that "based on hundreds of testimonies and documents that have come into rabbinical courts, and based on the admission of many on these conversion committees, it has been discovered that these conversions teach a heretical curriculum."

Their most aggressively proclaimed argument is the omission by the conversion agencies to insist on the complete acceptance of Mitzvas.

Quoting the Lubavitcher Rebbe, the Chabad rabbis simply state that a conversion "without acceptance of G-d's commandments is nothing like a conversion."

Amongst the signatories are Rabbis Boruch Boaz Yurkowicz from Lod, Yisroel Yosef Hendel from Migdal Haemek, Dovid Meir Druckman from Kiryat Motzkin, Gedaliah Axelrod from Haifa, as well as many more rabbis from across the country.

In the wake of the controversy, Chabad in Israel was shaken once again when leading Chabad authority Rabbi Mordechai Shmuel Ashkenazi voiced his support for the Chief Rabbinate.

Addressing his fellow Chabad rabbis' letter, Rabbi Ashkenazi says he sees the interference of Chabad rabbis in this issues as inappropriate.

"The Rebbe, in his last directive in connection with 'Mihu Yehudi', said he was handing over the responsibility to the Chief Rabbinate."

Rabbi Ashkenazi, who serves as rabbi of Chabad's largest neighborhood in Israel in Kfar Chabad, said that he held Rabbi Shlomo Amar in high esteem and "trusted him not to present that which is questionable."

Rabbi David Meir Druckman, who signed the original bill against the conversion proposal, defended his and his colleagues' position regarding the issue.

"Taking a side on this issue is not left simply up to the more learned or more knowledgeable. I know what goes on in actuality."

Rabbi Druckman contends, that although Halachic authorities may deem it a Kosher conversion because it is done correctly, the proof is in the result, not the intent.

"Ask the 'converts' if they remained religious after their conversion," Rabbi Druckman challenged.

"Sadly, the vast majority return to a non-Jewish lifestyle upon receiving their 'certificate'. This sad reality is what I am up against. No rabbi, no matter how learned, can convince me of anything. The reality demands that the Chief Rabbinate disqualify itself from authorizing conversions, after seeing the disaster it has wrought, bringing so many to the faith, who are now outspoken deniers of G-d's existence and a religious way of life."

The Chabad rabbis letter against ID conversions, posted at bottom, is signed by several noted Chabad messianists, including Rabbi Sholom Ber Wolpe, who is also a hard right political leader who seeks to establish a rabbi-led theocracy in the West Bank: 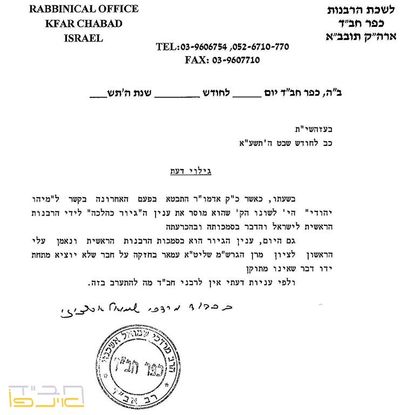 The outspoken opposition of IDF-sanctioned conversions by two dozen Chabad rabbis has now put them at odds with Kfar Chabad's rabbi, Mordechai Ashkenazi, who categorically rejects their claims.