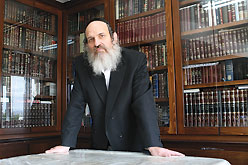 Jerusalem Police has been investigating for the past few days whether Peretz Hirschenbaum, Director of the charity Meir Panim, and David Roth, Director of American Friends of Meir Panim, attempted to blackmail influential haredi journalist Dudi Zilbershlag. The Jerusalem Municipal Court lifted a gag order on the case on Monday afternoon.

Five people have reportedly been arrested in connection to the suspected blackmail.

Hirschenbaum and Roth allegedly sent an actress who pretended to be a Bikur Holim Hospital donor to a Jerusalem hotel with Zilbershlag, and took pictures of the woman giving Zilbershlag a massage, as well as other intimate photos.

Hirschenbaum's lawyers, Uri Keidar and Amir Barak, released a statement saying that "Mr. Hirschenbaum has no connection or involvement with this incident, and we regret the attempt to slander him and blacken his face. Mr. Hirschenbaum is a respected business man in Israel and the world and an outstanding philanthropist that dedicates his life to help tens of thousands of needy people in Israel."

"Conversely, the complainant is a man with great debts that fools dozens of people and gained many enemies," Keidar and Barak said. "Now he has been caught in behavior that is not fitting the moral values of the community he belongs to...He is trying to move the spotlight from the heavy suspicions against him that have been published in various media."