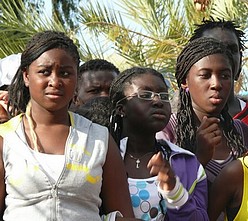 One in 10 Tel Aviv residents is a foreign citizen, a report released Sunday revealed.

The report was prepared by the Tel Aviv Municipality's Mesila Aid and Information Center for the Foreign Community, and presented during a debate held by the local council in the aftermath of the rally that was organized last week by residents of the Hatikva neighborhood, who called for the removal of foreigners from Israel.

According to the report, there are a total of 75,875 migrant workers in Israel, as well as approximately 100,000 illegal immigrants, not including 28,840 asylum seekers. The data, which was collected months ago, does not include the thousands of infiltrators who have made their way into Israel since.

The report shows that the asylum seekers primarily come from Eritrea and Sudan and that they are mainly of Muslim faith. They speak mostly Tigre and Arabic, while only some speak English. Most of the foreigners that reside in Tel Aviv clean houses and restaurants for a living and concentrate in the city's southern neighborhoods. Their average age is 35.

The Tel Aviv Municipality noted that there is a socio-economic difference between the migrant workers and the illegal refugees. The report defined the migrant workers as a "normative community that is despairing but has a strong work ethic." A large part of the community is made up of single parent families – women mostly, who work long days as cleaning ladies. A high percentage of them is educated, and they are rarely involved in crime.

In contrast, the asylum seekers are defined as "a community that has a multi-problem profile." They are identified as having communication difficulties, and having a hard time finding employment. Domestic violence is common.

The report states that the foreigners live in terrible sanitary conditions, which include disintegrating sewage systems and overcrowding.

"I have been waiting for a half a year for (Mayor) Huldai to bring this loaded subject to a debate. As we can see, hundreds of mothers and children have been added to the infant welfare center and hundreds of families have been placed under social workers' care," said Tel Aviv Councilman and Chairman of Hatikva neighborhood Council Shlomo Maslawi.

"This is of course at the expense of the veteran residents who pay taxes to fund these services. It's too little too late to bring this up at the council now, because we have tired of the government."

Maslawi called on the mayor to enforce building codes because of the split apartments in which the migrants are residing, in order to limit their numbers in the city. Mayor Ron Huldai called on the government for help but also asked that residents of the city respect all people.

I'm not sure if the accuracy of this report can be trusted. Even if it can, a significant number of these refugees are Christian.

Past that, Israel's policy has created a situation where refugees are exploited by employers and are forced to live in deplorable conditions. And this spurs crime.

Now, for those of you inclined to be racist or who already are racist, consider this: everything said about African refugees in Israel today was said about Jewish immgrants to America in the early 1900s, including the claim that crime dramatically increased due to their immigration. (In fact, probably half of NYC mobsters in those years were Jewish immigrants, some of them rabbis' sons. A brief list: Arnold Rothstein, Meyer Lansky, Bugsy Siegel, Abe "Kid Twist" Reles, Dutch Schultz, Louis Lepke Buchalter and Charles Haim – and that's a very abbreviated list.)

We should be helping refugees, not treating them like dirt. But we don't learn.