Aharon Friedman, an Orthodox Jew, won't give his wife a get, a Jewish divorce, even though he initiated civil divorce. Friedman is using the get as leverage to try to overturn custody arrangemnts made by the civil court.

Rabbis, including Hershal Schachter and Shmuel Kaminestsky, have ruled that Aharon Friedman must give the get immediately, but Friedman refuses to do so.

This week, a demonstration was held in front of Friedman's residence:

Protesters Rally in Support of Tamar Epstein
More than 100 people protested Sunday outside a Wheaton apartment complex for a local man to give his ex-wife a religious divorce.
By Taylor Kate Brown • WheatonPatch 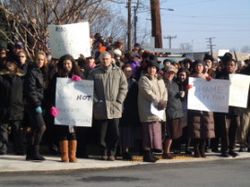 More than 100 people gathered along University Boulevard near the high-rise apartment building the Warwick on Sunday afternoon, to protest Aharon Friedman's refusal to give his former wife, Tamar Epstein, a Jewish decree of divorce, also known as a get.

"Aharon Friedman, give Tamar the get!" the crowd chanted at the foot of the building's driveway.

Cars slowed down as they drove past the intersection of University Boulevard and Arcola Avenue. The crowd started to spill over into the apartment's driveway, as police tried to move the protesters off private property.

About 50 people from Philadelphia, where Epstein currently lives, arrived on a coach bus at the beginning of the rally. Without the get, as an Orthodox Jew, Epstein may not remarry or date.

Friedman has refused to give the get, citing a problematic custody arrangement settled by the state of Maryland at the time of their civil divorce. The Organization for the Resolution of Agunot, an international group that advocates for the get, set up a rally on Sunday to try and apply pressure to Friedman. Groups of people also walked over from Kemp Mill and other parts of Wheaton to hold signs demanding the get be granted.

Lew Joseph, a Silver Spring resident, stood at the rally because he supported Epstein and ORA's efforts to bring attention to her and other women in similar situations.

Epstein herself was in the crowd.

"It's a mixed feeling," she said about the protest's effect on her. "It's hard to come to terms with my life being public in this way, but I'm gratified for the turnout."

After consulting with several rabbis in Baltimore, Epstein said she believes that she does not need to go to the Bet Din, the Jewish court, to change the custody arrangement. Both Epstein and ORA argue that Friedman should not use the get as a way to gain a more favorable custody arrangement.

"We did everything we could not to come to this rally," he said, citing four months of mediation between Friedman and his supporters.

Rabbi Shmuel Herzfeld of Ohev Sholom, the National Synagogue and Rabbi Avraham Shmidman of the Lower Merion Synagogue in Pennsylvania also used the megaphone to speak to the assembled protesters.

"Aharon Friedman walks around Capitol Hill as a religious Jew," Herzfeld said, mentioning Friedman's job with Rep. Dave Camp of Michigan﻿, the ranking Republican member of the Ways and Means Committee. "But this is not what a religious Jew does."

Herzfeld reasserted that the community would be there to support Epstein.

Friedman did not appear at the protest. In the past few days, letters have circulated supporting him, arguing that the original custody arrangement was unfair and that Epstein acted in bad faith. Beyond the fact that the two are civilly divorced, the two sides disagree on almost every aspect of the case.

David Butler, a Kemp Mill resident, said he attended the rally because he felt the situation was unjust.

"I feel pretty strongly that what's going on is wrong," Butler said. "It's a generally quiet community, and the interest speaks volumes."

It has been reported to me by your Republican colleagues on the Hill that you, and Dave Camp and Eric Cantor have all been made aware of Aharon Friedman’s refusal to give his wife a Get.

What this means is that even though Aharon and his ex-wife Tamar are Divorced according to civil law (for 8 months now), he is still “chaining” her and preventing her from remarriage according to Jewish law.  This is in effect a psychological terrorism which is brutal and cruel.

Your response to me that “this is not a matter for the committee” is unacceptable and weak.

Great rabbis have investigated this matter personally for many hours and have concluded that Aharon needs to give the Get immediately.

I believe with all my heart that every day he works for you and with you, and for Dave Camp and with Dave Camp, he is a direct reflection upon both you and the Congressman.

It is your ethical and professional responsibility to tell Aharon to give the Get immediately.  If you do not do that you are indeed complicit in his behavior.

Yesterday a rally was held in Silver Spring in front of Aharon’s home and more than 200 people attended.  I do believe it is appropriate to also rally in the vicinity of Aharon’s work place.

I am bccing this to people on the Hill so that this matter becomes more widespread and a topic of every day conversation.  Anyone who has the ability to convince Aharon to give a Get should do so.  It is a great mitzvah to help Tamar receive a Get.

If you and Aharon would like to meet with me in person to discuss this, I am, of course, always available.

Here is a link to more information:

Aharon Friedman, an Orthodox Jew, won't give his wife a get, a Jewish divorce, even though he initiated civil divorce. Friedman is using the get as leverage to try to overturn custody arrangemnts made by the civil court.