200 people demonstrate in city center against 'Arabs who are taking our daughters'; leftists wave signs reading "Jews and Arabs refuse to be enemies." 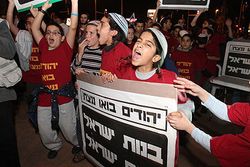 Some 200 people held a demonstration in central Bat Yam Monday evening against relationships between local Jewish women and Arab men.

During the rally, held under the banner, "We Want a Jewish Bat-Yam", demonstrators also insulted the prophet Muhammad and made racist remarks against Arabs and their saints.

Police forces maintained order, but did not act when the demonstrators made racist remarks. "We are not racist, we are just Jews. The Arabs are coming and taking our daughters. We will not allow it," one of the speakers said.

Moshe Ben-Zikri of Eilat said the "struggle" began three years ago in Givat Ze'ev. "There were 330 Arab families there, and the Jewish women would walk around with them freely. We vowed this would not happen again.

"Just like we triumphed their, we will triumph in Bat Yam as well. We are not afraid of the police, the media or the Arabs – we only fear God," he said.

One of the event's organizers, Bentzi Gupstein told Ynet Sunday night, "So many Arabs are dating Jewish women, and the public is fed up with it.

A short distance away, about 200 leftists and Arab residents of Bat Yam held a counter protest. They waved signs reading, "We're fed up with racists" and "Jews and Arabs refuse to be enemies".

Look at the age of the demonstrators in the top photos. Since when are 11-year-olds competent to judge adults dating choices? And what kind of parent sends their 11-tear-old to a racist rally?

These days, the answer to those questions seems to be Orthodox ones.

200 people demonstrate in city center against 'Arabs who are taking our daughters'; leftists wave signs reading "Jews and Arabs refuse to be enemies."