The charges have been sensational: a rabbi's widow and her children exiled to a crack cocaine-infested apartment building and a fired rabbi interrupting services with uninvited sermons. 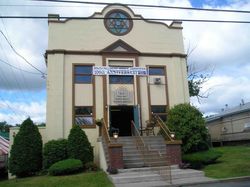 FALLSBURG — The charges have been sensational: a rabbi's widow and her children exiled to a crack cocaine-infested apartment building and a fired rabbi interrupting services with uninvited sermons.

Lawyers for the South Fallsburg Hebrew Association and Isaac Gottlieb both signed paperwork in June that seemingly ended the long-running legal battle ignited when the association fired Gottlieb as rabbi for its synagogue in 2004.

In that time, he has fought to be reinstated as rabbi of a synagogue whose leaders maintain that he was an at-will employee who made unreasonable demands for new housing.

"There was a settlement," said Barry Gold, recording secretary for the SFHA's board. "The case was concluded before a judge, and that was the end."

Gerald Orseck, who represented Gottlieb at least up until June, refused to comment.

Gottlieb is also not talking, having failed to return several phone calls.

At the heart of the dispute has been the SFHA's decision to end Gottlieb's 11-year run as its rabbi in December 2004.

Gottlieb says the firing violated an agreement sanctioned by the synagogue's members.

He raised that issue in a lawsuit that emerged months later against SFHA's officers and in another suit against the association in 2006.

Those suits also alleged that SFHA mistreated his predecessor's widow, Chana Kreitman, described in court documents as "near penniless, jobless, and, in general, entirely unprepared to deal with a world her husband had always managed."

The association, after naming Gottlieb its new rabbi in August 1993, began pressuring Kreitman and her three children to vacate the synagogue's parsonage.

She was eventually moved to a "crack apartment building" in Monticello, Gottlieb said in court documents.

The association followed with its own lawsuit.

It accused Gottlieb of soliciting money on association letterhead after he was fired and disrupting services on several occasions with impromptu sermons.

The association also accused Gottlieb of failing to perform weddings as expected and often being absent from services on Jewish holidays.

The undisclosed settlement in June resolved monetary claims from both sides, said Gold.

Failed efforts to settle those claims had precipitated Gottlieb's initial lawsuit, he said.

"We begged him to come and talk to us so we can straighten out these matters," said Gold. "Instead he sued us."

The charges have been sensational: a rabbi's widow and her children exiled to a crack cocaine-infested apartment building and a fired rabbi interrupting services with uninvited sermons.