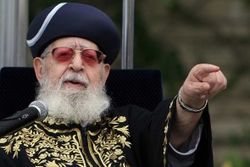 The spiritual leader of Shas, Rabbi Ovadia Yosef, ordered the party on Wednesday to express his discontent with a recent decision to respect IDF conversions.

On Wednesday morning Yosef met with Shas Chairman Eli Yishai and Ministers Meshulam Nahari and Ariel Atias. The meeting ended with a demand the prime minister vote against the bill, which was approved by the Ministerial Committee on Legislative Affairs Sunday.

After the bill was approved Minister Meshulam Nahari appealed against it, demanding a Knesset debate. In a conversation with Ynet he explained that it was unacceptable to remove the authority of conversions from the chief rabbi.

"The next thing will be a decision that the army can marry couples and issue kosher certificates independently. We are one people and there is no reason for this," he said, adding that conversion applicants rejected by the Rabbinate could begin to use the IDF as a bypass.

The Shas Party suggests that the state anchor the Chief Rabbinate's authority in Israeli law, thus placing all conversions under its authority and ending the controversy.

Chief Spehardic Rabbi Shlomo Amar also called Tuesday for opposition to the bill, telling Netanyahu it would have "severe consequences in the future".

"I am emphatically against this bull which shows contempt for the converting soldiers by separating them from the rest of the nation", Rabbi Amar explained.

Posted at 06:58 AM in Haredim, Israel, Sefardim | Permalink