« What Do You Say To Rabbis Who Interfere With Organ Donations? | Main | Impact Of The Ban? » 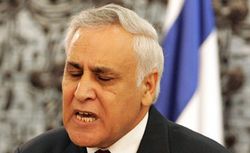 Former President Moshe Katsav's attorneys are planning to appeal the Tel Aviv District Court's decision to convict him of rape, sexual assault and other sexual abuses.

"Precisely because the verdict was so unequivocal there is room to appeal and to raise the fact that the court ignored the evidence," attorney Avigdor Feldman told Israel Radio after the judges read their decision on Thursday.

"The verdict has created an image of Moshe Katsav as a gambling man, devious and a manipulator," added Feldman. "There is absolutely no basis for that."

When asked whether he really believed that his client was innocent, Feldman declared: "When Moshe Katsav decided to reject the plea bargain, it was clear that he was heading toward a vicious battle… but he decided to do it. I say that it looks like he has been guided by his conscience."

In a separate interview with Army Radio, Feldman said that he was worried about the effect this verdict would have on Katsav's mental health. "I hope he will have the strength," said Feldman.

Prosecutor Ronit Emanuel urged journalists as she exited the courtroom to focus first and foremost on the complainants, whose identities have been kept secret for protection. "The public treats them as letters, devoid of names or personalities," said Emanuel.

"We have seen you through the criminal process show continued courage and determination in dealing with the events you experienced," Emanuel said, addressing her remarks directly to the victims. "Today, we salute you. The message to survivors of harassment is 'do not be silent'."

The Tel Aviv court found Katsav on two counts of rape, sexual assault, sexual harassment and obstruction of justices. The judges ruled that his version of events was "riddled with lies."

The unanimous verdict was handed down more than four years after complaints surfaced of grave sexual offenses against various subordinates, during his terms as tourism minister and as president.

Katsav was convicted of raping and sexually assaulting A., a former employee at the Tourism Ministry. He was also convicted of sexually harassing H. from the President's Residence, of sexually abusing and harassing L. from the President's Residence and of obstruction of justice.
The 65-year-old former president was acquitted on only one charge - that he allegedly harassed a witness.

The year-long trial took place almost entirely behind closed doors, and left the public wondering whether Katsav made a wise move when he abruptly dropped out of an extremely lenient plea bargain two years ago.

The plea bargain meant that Katsav would not face the most serious charges and promised him a suspended sentence at worse, but the former president decided he wanted to prove his innocence in court.

As he read the verdict aloud Thursday, presiding judge George Karra said that by choosing to reject the plea bargain, Katzav had shuffled the deck, and not in his own favor.

Karra told the court that the long period of time that passed during the trial had led to new evidence arising, which supported A.'s claim and essentially discredited Katsav.

Katsav had tried to charm A., Karra determined, and when she did not respond to his overtures, he began to harass her. The defendant told the victim that he was in love with her, added Karra, and left her feeling humiliated.

"We accept A.'s version of events that the humiliation stemmed from a single reason, that she refused to accept the defendant's sexual advances," ruled the panel of judges.

"While the defense team called this a malicious plot born from A.'s desire to seek revenge against the accused for firing her, the prosecution produced a list of witnesses who testified to having heard A.'s remarks over the course of time between when the event occurred and when the case broke open," said Karra.

"These testimonies disqualify claims of slander," the judges ruled. "All of the testimonies based on what A. said contradict the defendant's claims that this was an invention born of emotion."

The court did not immediately hand down a date for sentencing. Rape carries a minimum prison sentence of four years and a maximum of 16 years.