« Acting On Behalf Of Rabbis, Jews Threaten To Murder Druze IDF Veteran And His Arab Roommates, Forcing Them To Flee Home | Main | Not Letting Go: The Anatomy Of An Agunah »

In Wake Of Devastating Wildfires, Israel's Firefighters Blast Govt Decision To Earmark More Money For Haredi Yeshiva Students But Not To Firefighters

"Netanyahu chose yeshiva students and abandoned the firefighters. This is an outrageous decision that constitutes a shameful and clear message to the Israeli public that it is being led by a cynical, indifferent man whose priorities harm Israel." 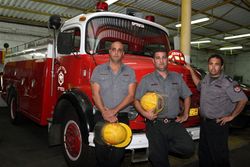 Carmel blaze forgotten? Firefighters are upset after the Knesset's Finance Committee approved a state budget that includes more funds to yeshiva students but no extra money for Israel's firefighting brigades.

"We haven't learned a thing," a senior firefighter said in response to the news, referring to the recent Carmel fire that prompted official promises to change the grim state of Israel's firefighting services. "It's a disgrace."

Officials did not designate any extra funds to the fire brigades at this time, but the Treasury said that a detailed plan for boosting the firefighting budget would be submitted to the government within two months.

Firefighter Boaz Rakia, who served as the fire brigades' operations officer during the Carmel blaze, will arrive at the Knesset Thursday with other firemen in an effort to translate promises for more funds into reality.

"We saw that the budget approved for the next two years does not include an addition for the firefighters, and that's truly disappointing," he said. "We haven't learned a thing, and that's a disgrace…a disaster happened, yet nothing has changed."

Rakia said the latest developments are a source of shame for the Israeli government, which he accused of leaving firefighting services as a lowly priority.

"We're concerned by the attempt to make headlines on our backs and are worried that a rash plan to change the firefighting services would be passed hastily without consulting with us," he said. "Nothing has been done even for appearances' sake."

'It's a terrible decision'

Another firefighter, who serves in Beersheba, also expressed his disappointment.

"The haredim matter more," he said. "It's true that they too are supposed to get something, but some things are more important. I think the disaster had already been forgotten…otherwise they wouldn't approve money for yeshiva students only. It's a terrible decision."

Another fireman, who has been serving for some 30 years, said he was stunned by the budget decision.

"Soon the ashes will dissipate and the names of the casualties would be forgotten, while we remain in the same situation," he said. "I think nothing will change even by the time I retire."

"Netanyahu chose yeshiva students and abandoned the firefighters," the statement said. "This is an outrageous decision that constitutes a shameful and clear message to the Israeli public that it is being led by a cynical, indifferent man whose priorities harm Israel."

Yoav Zitun contributed to the story.

Widespread public condemnation of the government's budget forced the government to immediately fund firefighting services. Haredim, however, were not defunded:

Israel fire services to get additional NIS 300 million for annual budget
Move comes after Carmel fire disaster and uproar over lack of funds to firefighting services.
By Zvi Zrahiya • Ha’aretz

Israel's Fire and Rescue Service will receive an additional NIS 300 million in 2011, Interior Minister Eli Yishai agreed with the Finance Ministry on Thursday.

The two ministries are currently discussing further criteria necessary to decide upon the specific sum the fire service will receive in 2011.

Regardless, when the Knesset Finance Committee approved the 2011-12 budget for its second and third reading on Wednesday, the budget did not include extra funds for the fire services.

Both the delay and the failure to cite a specific sum outraged the opposition on the committee, leading Kadima MKs Yoel Hasson and Majali Wahabi to urge their fellow lawmakers not to approve the budget until extra funding for the fire services was included.

Later on Wednesday, Kadima issued a statement accusing Netanyahu of "favoring yeshiva students while abandoning the firefighters," because the committee did approve an extra NIS 19 million for yeshivas and yeshiva students.

In Wake Of Devastating Wildfires, Israel's Firefighters Blast Govt Decision To Earmark More Money For Haredi Yeshiva Students But Not To Firefighters

"Netanyahu chose yeshiva students and abandoned the firefighters. This is an outrageous decision that constitutes a shameful and clear message to the Israeli public that it is being led by a cynical, indifferent man whose priorities harm Israel."