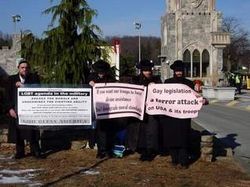 HIGHLAND FALLS — Braving the cold weather, four men from the Hasidic Jewish community in Monsey picketed Monday afternoon just outside of the U.S. Military Academy at West Point to protest gays serving openly in the military.

Solomon Diamant, one of the protesters, said they were appalled by the Senate vote that ended the 17-year-old "don't ask, don't tell" policy.

One of the protest banners stated that ending the gay ban in the military "breaks the morale and undermines the fighting ability of our devoted self-sacrificing soldiers who give their lives for us and for our country. Those who are imposing this on our troops are supporting America's greatest enemies and destroying the country . Please keep our country faithful to the biblical values upon which it was founded."

Another sign stated: "I want our troops to have divine assistance. Don't downgrade moral standards."

Jim Fox, a West Point spokesman, said the protesters were outside of the academy's property and therefore, he would not comment on their appeals.

"We understand that there were four individuals outside of our Thayer Gate in the village of Highland Falls, exercising their rights to peacefully protest," Fox said.

Diamant said he and others have been protesting not only the repeal of the ban on gays in the military but also other issues involving LGBT, such as gay marriages. They have traveled to Albany, Trenton and Washington to voice their opposition to LGBT causes.

"Accepting LGBT is against God," said Rabbi Yosef Rosenberg. "It's a betrayal against mankind."

The debate over gays in the military has been settled with a historic decision to allow them to serve openly, but big questions lie ahead about how and when the change will take place, how troops will accept it and whether it will hamper the U.S. military's effort in Afghanistan and Iraq.

President Barack Obama is expected to sign into law this week the legislation that passed the Senate on Saturday, an act some believe will carry social implications as profound as President Harry S. Truman's 1948 executive order to end racial segregation in the military.

The new law probably won't go into practice for months.

Posted at 10:20 AM in Haredim, Homophobia and its Discontents | Permalink