« Brooklyn Rabbi's Son Accused Of Sexual Abuse Ordered To Stay Away From Sisters As Father, Brother Hide Out In Israel | Main | Explaining Chabad: How Did A Small Hasidic Court Become The Worldwide Face Of Judaism? »

Eli Yishai, who is responsible for the country's firefighting services, contends that he did much to improve them. 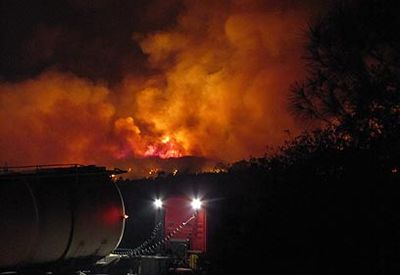 Interior minister denies responsibility for lack of firefighting resources
Eli Yishai, who is responsible for the country's firefighting services, contends that he did much to improve them.
Ha’aretz

The Interior Minister, Shas leader Eli Yishai, responded on Saturday evening for the first time to criticism leveled at him for the performance of the country's firefighting services, which fall under his purview, in the massive fire burning through the Carmel region of northern Israel.

The minister emphasized in an interview with Channel 2 throughout his political career, there was no issue that he dealt with more than the firefighting services in Israel, which are, in his words, in a "catastrophic condition."

"I am happy to be interrogated and I requested an investigation commission to bring the truth to light," Yishai said. "I wrote letters and warned about the situation. I told Netanyahu that I will not vote with the government in non-confidence votes on this issue, if they come up."

Yishai stated, "I did a lot, and as a result of my struggle… I brought a hundred million shekels after eight to ten years, and I asked for more."

The interior minister gave examples that he contends prove his commitment to the issue of firefighting. "Seven years ago, when Ariel Sharon was prime minister, they made a decision to cancel firefighting aircraft, and I was the only one that voted against it."

Yishai also said that last year he requested and recommended that firefighting be transferred to the authority of the Interior Security Ministry.

Responding to a query of whether he was considering quitting his post, Yishai responded, "I didn't call for an inquiry for nothing, and it's no accident that even firefighters have been saying that since I arrived [to this position], the money has started to arrive. When the committee is formed and conducts a proper inquiry, it will all become clear and the truth will see the light."

Yishai continued, commending the performance of Prime Minister Netanyahu and Public Security Minister Yitzhak Aharonovitch. He attacked the media, claiming that they covered his comments regarding foreign workers and stipends for religious students, but although "there was no issue that I commented on more than firefighting, there is no record of this because it didn't interest the media."

Interior Minister Eli Yishai, who is in charge of Israel's firefighting services, responded to criticism Saturday following a wildfire in the Carmel region which claimed the lives of 41 people.

Yishai said he was not trying to shirk responsibility and had called for the establishment of a commission of inquiry into the disaster. He accused his predecessors of "failing to act", as opposed to him.

"I'm not evading responsibility," he said. "I've been acting ever since I took office. I have been the interior minister for less than two years."

Yishai told Ynet that a commission of inquiry "must provide the answers".

"I am responsible for the Interior Ministry and the firefighting services," he said, "but I will wait for the investigation committee's conclusions and do what it says."

"I spoke to all relevant elements on this issue. Unfortunately, when I reached the Interior Ministry the equipment's condition was not good. I demanded that equipment be purchased. Unfortunately, the budget isn't big enough," he said.

The finger pointed over at Yishai is not rocking the government – and it is unlikely that Yishai will resign. Senior ministers said Saturday that despite public calls for his resignation, "nothing will happen."

One minister said Yishai is already busy "covering his behind," explaining at every opportunity that he is not responsible. "Nothing like resignation will happen," the minister said. "Who cares if he resigns or not?"

"He will never resign, and anyway you can't resign over everything," said a source who knows Yishai well. "Resignation is not a solution in his opinion, and he will never resign over anything. However, it must be noted that right now they are doing him an injustice. The Finance Ministry controlled all the ministries, and it determines everything. It's true that Yishai could have insisted more if he had wanted, but the Finance Ministry has people deciding what happens in each ministry."

Experienced ministers noted that people could be found to take the blame. "Ronnie Bar-On and Meir Sheetrit were also interior ministers, but in the end it comes down to some clerk at the Finance Ministry who didn't agree to allocate the requested sums to the firefighting services," they said. "This is a familiar story, and in the end they'll find that someone stuck something in some ministry, and that'll be the end of it."

It is not yet clear whether Yishai's call for a national investigating committee will be answered, since Prime Minister Benjamin Netanyahu opposes such a move. However, ministers said the prime minister is aware he must set up some kind of investigation. "A national investigation committee is unnecessary, and is mainly a source of profit for lawyers," they said, adding that recommendations from any investigation would be clear: The firefighting services should be transferred to the authority of the Ministry for Internal Security.

Another minister who is also a cabinet member said he did not think a national investigation committee would be set up, though of course there would be an investigation. He noted there was also the state comptroller's own investigation which would soon be released.

However, government ministers over the weekend expressed their satisfaction with the prime minister's behavior during the crisis, saying "he managed to realize it was a mega-event. He knows how to do the right show for the public, like Sunday's government session in Tirat Carmel, which is a total pose. Friday's cabinet meeting was also a show. We didn't vote on anything. It seems Netanyahu just wanted to be seen in public with his ministers. They showed us a lovely presentation and aircraft. We saw photos. It was nice but nothing more than that."

Meanwhile, the state comptroller will release a report on the firefighting services during the next fortnight. This report was supposed to be included in a special monitoring report released following the Second Lebanon War, on the functioning of the home front on security issues.

In 2007 a state comptroller's report noted the firefighting services were a weak point in rescue operations. But despite this report, government ministries did not follow the recommendations and not only was the situation not corrected, but it deteriorated during the last three years. The coming report, described as extremely grave, exposes new faults and the state comptroller is expected to write that fundamental changes are required throughout the firefighting services, as well as new equipment and increased manpower.

Eli Yishai, who is responsible for the country's firefighting services, contends that he did much to improve them.