« Orthodox MK: Arrest All Bedouin, Put Them In "Pounds," And Shoot Those Who Bring Refugees To Israel | Main | Many Israelis Question Haredi Welfare, Yeshiva Stipends » 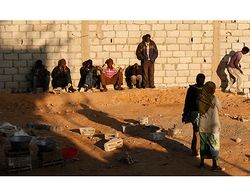 Approximately 250 Eritrean refugees have been held captive and tortured for the past month by Hamas in northern Sinai, human rights organization EveryOne reported.

The Italian-based organization sent an urgent plea to the Egyptian government last Thursday, claiming that the refugees, who were making their way to Israel to seek asylum, were captured by human traffickers.

The issue of illegal refugees infiltrating through the Egyptian border has been dominating the news in Israel in recent months, but it appears that many meet a dreadful fate even before reaching the Jewish state.

The humanitarian aid group reported that the refugees in question encountered Hamas operatives along the route, who promised to smuggle them into Israel for a payment of $2,000. Instead, they were placed in a detention facility on the outskirts of Rafah, an Egyptian town on the Gaza border, demanding their families in Eritrea pay a $10,000 ransom for their release.

It was further noted in the statement that eight of the immigrants were killed, and four have gone missing – allegedly being the subject of human organ harvesting and trafficking. About 100 of them were transferred to a 'concentration camp' at an unknown location, perhaps in the Palestinian territories. The captives are beaten, the women and children raped.

"The prisoners eat poor food and are forced to drink their own urine," the statement reads. "Most of the migrants are contemplating suicide."

According to Roberto Malini, who heads EveryOne, the NGO is able to communicate with the Eritreans, some of whom arrived in Italy a few months ago but were sent back to Libya, where they were held for three months. During their stay in Italy they were given cell phones so that they can keep the humanitarian aid group updated along the journey. The captors let the prisoners use the phones to request money from their families.

The refugees were thus able to relate the poor conditions in which they were being held, and describe their location – a house located near a government building, surrounded by a fruit orchard – and even send photographs of the detention facility.

According to refugees who survived similar journeys and reached Israel, once the ransom is paid, the traffickers escort the prisoners to certain points along the border. Those who are unable to gather the funds will meet a bitter end.

EveryOne officials claim that despite their repeated efforts to inform the Egyptian authorities of the dire situation, no action has been taken to remedy it, primarily because terrorist groups are behind the atrocities.

"The authorities have still not carried out any inspections of the locations that have been pointed out to them (in the town of Rafah)," the statement reads. "The reason is quite clear… behind the crimes that serve to fund terrorism and to make huge profits for unscrupulous people is a criminal organization so powerful that it is able to challenge and defy governments: the Muslim Brotherhood (the organization Hamas belongs to) and al-Qaeda."