« Where's The Outrage? The Surreal Mistreatment Of Women At The Western Wall | Main | NJ Bill To Remove Statute Of Limitations As Factor In Civil Child Sexual Abuse Cases Up For Hearing »

Evidence: Haredi Rabbis Knew In As Far Back As 1997 That Now Convicted Pedophile Israel Weingarten Was Molesting His Daughter But Did Not Call Police

Even though rabbis knew in late 1997 that Rabbi Israel Weingarten was sexually abusing at least one of his daughters, they did not tell police or child protective services. US Federal prosecutors convicted Weingarten for trafficking her across national borders for the purpose of sex in 2009. Weingarten worked at Torah Temimah, the yeshiva that also employed notorious haredi pedophile Rabbi Yehuda Kolko, and he was close to disgraced Rabbi Leib Tropper.

Posted with permission of Yerachmiel Lopin of FrumFollies.

In 2003 a letter was sent by Rabbi Mordechai Stauber in Antwerp to the Bais Din of R Wosner in Monsey. You can see the Hebrew original below.

Respectfully to the renowned great scholar, presiding on justice, righteous leader to his congregation, his glory on the Jewish people, the honorable renowned, Rabbi, Gaon Benzion Yaakov Halevi Wosner, may he be granted long days, and along with him to the rabbis and sages, members of the Beit Din Tzedek (religious court) of the Holy Congregation of Monsey.

After inquiring about your well-being, I am answering your request to write what I know about the painful affair of the Weingarten family.  They lived here in our city Antwerp for many years. Their young girls were educated here in Bais Rachel of Satmar. There was a feeling during all those years that an oppressive atmosphere was controlling the girls and their mother. Though we tried to do everything for the good, it did not help much. In the summer of 5756 [1996] Reb Yisroel Moshe came and pestered us to move his oldest daughter, Frumah Leah, to a higher class; something we don’t do for others. After deliberation we decided to agree. We knew the bitterness of the daughter came from the goings-on at the house. Therefore [we thought] it is worth giving in on a trivial matter; perhaps through this the student will be more satisfied.  But actually we saw, to the contrary, that she came to school with swollen eyes, and at times, with other marks. We did not want to touch this because we knew they were odd people and we wouldn’t accomplish anything.

Reb Wolf Gross, who lives several houses away from them, was a true friend of Yisroel Moshe, and he helped them a lot so there would be something to eat in their house. He told me that Frumah Leah wants to commit suicide, G-d save us, and throw herself out the window. They actually saved her at the last moment. [He told me that] in my role as principal I am obligated to interrogate her in order not [to be guilty of] “standing by on the blood of a fellow Jew” [Leviticus 19:16].

I initiated discussions with her several times until she revealed to me that she endured murderous beatings from him [her father] for reasons she could not reveal to me under any circumstances. Only after much urging and assurances, she wrote on paper that for a long time her father was doing with her [sexually] perverted things, have mercy on us. I do not remember all she wrote. But this I remember exactly as I received it from her. “He takes and he ejaculates (motzi zerah l’vatallah) …(ellipses in original) very close to actual biblically prohibited incestuous intercourse, (ad karov ligiluy arayos mamash), have mercy on us.    She added afterwards, verbally, that she was disgusted with a life like this for a quite a while and that he hit her with frightening sadism. Because of this she wanted to put an end to her life, G-d save us.

It is self understood what a shock this was for us.  Because the one of whom we speak was a girl of 15, we passed the matter over to the rabbonim and the leader of Satmar [in Antwerp], Rabbi Chaim Yosef Dovid Weiss, may he live long, head of our congregation. [Rabbi Weiss] took the testimony and he [the father] did not deny it. As a consequence he [Rabbi Weiss] forbade him [Yisroel Weingarten] to seclude himself with his daughter (asar lo l’hityached im bito). He arranged for her to immediately go to Manchester, [England, to a girls school where she would board].

This happened during Chanukah, 5757 [December 1997]. At the end of the winter she returned from Manchester and the whole family traveled to Israel for Passover. After Passover he [Yisroel Weingarten] returned alone with his aforementioned daughter and he was secluded with her all summer. All we did was write a letter that we have no responsibility (achrayis) for the aforementioned student [Frumah Leah] from here on in. Also, that none of his children have permission to set foot in our institutions. Till the month of Ellul, his disgrace was not [publicly] revealed. On the contrary; he [Yisroel Weingarten] made himself out to be a respectable man and we kept quiet. In the middle of Ellul his true disgrace was revealed through others with more ugly things. The whole city was astonished. Suddenly it came out through a tape that the daughter was involved in sin with a neighbor, Meyerowitz. This was something that the dayan of Satmar did not hear from him [Yisroel Weingarten] all through the course of the previous winter while he judged him.

We surmised that all of his doings were astounding and full of contradictions. My wife, may she live long, told me many times at the end of long discussion that she senses from him an air of impurity (ruach tummah). I still gave him the benefit of the doubt until I heard from his daughter the aforementioned deeds [about which she wrote]. Through this were explained many contradictions.

His wife endured a lot from him. Many times she burst out in gushing tears. He was terribly, unfathomably, sadistic towards her. After some weeks she returned and said that all of her words were nonsense and lies, and so on. It was seen that he manipulates her [manipaleert ) in a terrible way.

The devastation (hachurban) [evoked] in putting forth my words pains me greatly. [Do] what it is in your power to save them from this hypocrite, crook and swindler without equal who does the acts of Zimri and demands the reward of Pinchas [BT Sotah 22b referring to Numbers 25:6-14].  I would also add, that the Admor Rabbi Leibish of  Phshevorsk, may he live long, said that they investigated the family in 5757 [1997-1998], meaning the woman and daughter, in Jerusalem the holy city, and they [the investigators] uncovered things.

Signed and sealed in sorrow and wishing you success,

(HT for Translation to DH and JE) 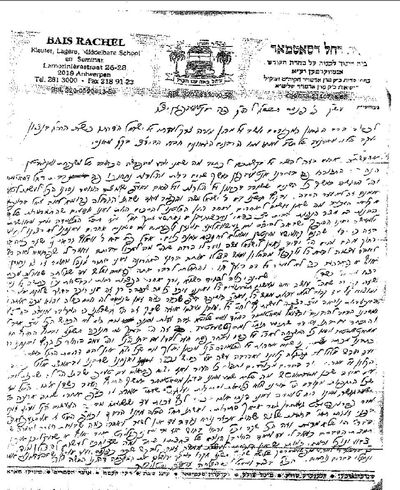 Evidence: Haredi Rabbis Knew In As Far Back As 1997 That Now Convicted Pedophile Israel Weingarten Was Molesting His Daughter But Did Not Call Police

Even though rabbis knew in late 1997 that Rabbi Israel Weingarten was sexually abusing at least one of his daughters, they did not tell police or child protective services. US Federal prosecutors convicted Weingarten for trafficking her across national borders for the purpose of sex in 2009. Weingarten worked at Torah Temimah, the yeshiva that also employed notorious haredi pedophile Rabbi Yehuda Kolko, and he was close to disgraced Rabbi Leib Tropper.