Rabbi Amar stays extra hour to speak with students, calls "on all MKs to meet with these young people and listen to the stellar ideas they have.”

Student leader: Amar favors more haredim in workforce, army
Rabbi stays extra hour to speak with students, calls "on all MKs to meet with these young people and listen to the stellar ideas they have.”
By BEN HARTMAN • Jerusalem Post 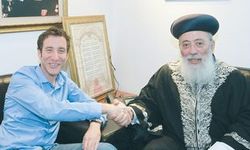 The meeting was at Amar’s initiative, and after the talks concluded, both sides spoke of an atmosphere of mutual respect and understanding.

The meeting came amid an ongoing protest by students against the supplements, which they claim unduly favors the haredi public.

During the meeting, Rabbi Amar said “when I first invited you, I was a little worried because I assumed that your hearts are still a bit pumped up from the mass rallies. After talking with [Student Union Head] Itzik Shmueli I discovered that the leadership is mature and responsible, and concerned about the greater good.”

The rabbi, who stayed for an extra hour of talks with the students after the press and photographers left, added that he was pleased by the dialogue with the students, whom he told that he supported greater participation by the haredi public in the workforce, as well as greater equality in the distribution of government supplements.

“I see, thank God, that there is a great deal of understanding between us. The togetherness is greater than the schism,” Amar said, adding that he “calls on all MKs from all the parties to meet with these young people and listen to the stellar ideas they have.”

A spokesman for Amar, Rabbi Yitzhak Peretz echoed Amar’s statement, saying the meeting “had a great and beneficial atmosphere for everyone,” adding that he believes that more and more of the haredi population wants to work and also join the army.

Shmueli said following the meeting that “we were pleased to find that the rabbi has an open door and an open ear to our problems. We didn’t discover any sort of disagreement between us and we reached an agreement on basically everything.”

In particular, Shmueli said the rabbis and the students saw eye-to-eye on the need for more haredim to enter the workforce and equality in government stipends for all sectors.

Shmueli added that the student protest, “is not against the haredim or the yeshiva students, it is merely in favor of equality and the greater incorporation of the religious public into the workforce.”

The meeting came two days after some 10,000 university students from across Israel marched in Jerusalem under the slogan “We’re not suckers!” to show their opposition to government plans to renew the stipends, even though they had been disallowed by the Supreme Court, which ruled they were discriminatory.

Chief Sephardic Rabbi Shlomo Amar met with student representatives Wednesday and said that the yeshiva student bill should be made to apply for students in higher education establishments too. He did not discuss ways to implement his proposal.

In a meeting with representatives of the National Student Union held in his chamber, Amar called on students to keep a lower profile in their campaign so as not to be perceived as harboring anti-haredi sentiment.

The Chief Rabbinate said that the meeting was held in good spirits.

The National Student Union also described the meeting as friendly and noted that the rabbi agreed with their demand for equality and the integration of the ultra-Orthodox public into the workforce.

National Student Union Chairman Itzik Shmueli said: "We told the rabbi that we are not against the haredim but in favor of equality for all.

"The rabbi mentioned that he was initially wary of meeting with us as he thought we would be too eager after the protest but he said he found us to be mature and responsible. He respected our ideas and promised to urge the haredi Knesset members to meet with us and hear us out."

Tomer Velmer contributed to this report.

Rabbi Amar stays extra hour to speak with students, calls "on all MKs to meet with these young people and listen to the stellar ideas they have.”